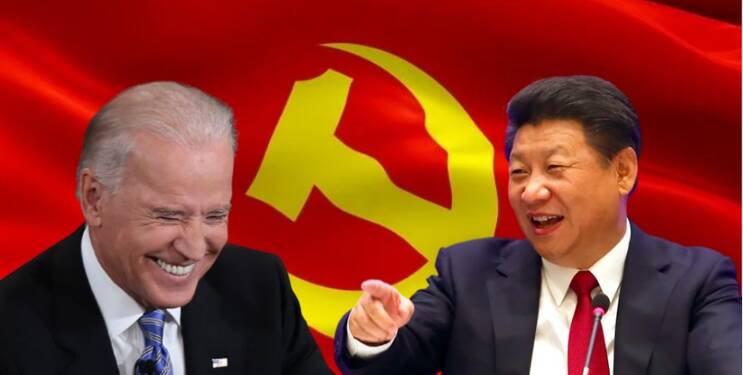 The White House recently released its new Indo-Pacific strategy, and it’s all about keeping the Chinese dictator Xi Jinping in power. There is no mention of the Chinese communist party or the CCP.

When former President Donald Trump was in power, his agenda to democratize the People’s Republic of China was water-clear. He wanted to set a regime change in motion in the communist nation. Now Biden has dumped this Trump-era approach altogether.

Biden’s new Indo-Pacific strategy says, “Our (The USA’s) objective is not to change the PRC but to shape the strategic environment in which it operates, building a balance of influence in the world that is maximally favourable to the United States, our allies and partners, and the interests and values we share.”

Expecting China to abide by international rules and ethics without freeing the nation from the clutches of the CCP is utterly childish and stupid. This is the repetition of the same mistake that the US had committed back in December 2001 when it felicitated China’s accession into the World Trade Organization.

A mistake that the US had committed back in 2001 also

The then-president Bill Clinton hoped that WTO terms would enable China to liberalize its economy and help China’s transition to Democracy. Clinton called China’s accession “a hundred-to-nothing deal for America when it comes to the economic consequences,” and one that would “have a profound impact on human rights and liberty” in China. Let alone doing away with communism, China built its massive economy by exploiting the WTO norms and is today striving to export the communist regime to other nations as well.

This came as a staggering lesson for the United States. Removing the CCP from China was a mandatory prelude for democracy to see the light of the day. That’s the reason when Trump rose to power in 2016, he placed special emphasis on marking a clear distinction between Chinese people and the Communist Party of China (CCP).

Pompeo on ‘China vs the CCP’

The former US secretary of state Mike Pompeo once said, “The Chinese people are completely distinct from the Chinese Communist Party (CCP). The biggest lie that they tell is to think that they speak for 1.4 billion people. The CCP fears the Chinese people’s honest opinions more than any foe.”

The former American administration launched a campaign to delegitimize the CCP’s authority over China. It was a campaign to unseat Xi Jinping. And it bore fruits as well. Much of the problems that the Jinping regime faces today trace their origin to Trump’s tenure only. Trump revived the Quad security alliance against China and reined in the USA’s trade ties with the communist nation. Today’s economic and political crisis in China has much to do with the actions taken by the Trump’s administration during 2016-2020.

Sources close to the CCP today claim that Chinese officials may organise an internal coup against President Xi Jinping, and transform China into a democratic government system. This could have been taken to be impractical a couple of years ago, but seeing how things are transpiring in China, it won’t bring any surprise if a change starts happening by the end of this year.

Read More: China could become a democratic nation by the end of this year

Joe Biden, being a BFF of the Chinese president, is now trying to subdue Jinping’s miseries by diluting USA’s anti-CCP policies. The CCP and Xi Jinping are at their weakest today, and the 79-year-old US president is going all out to keep the communist rule up and running in China.