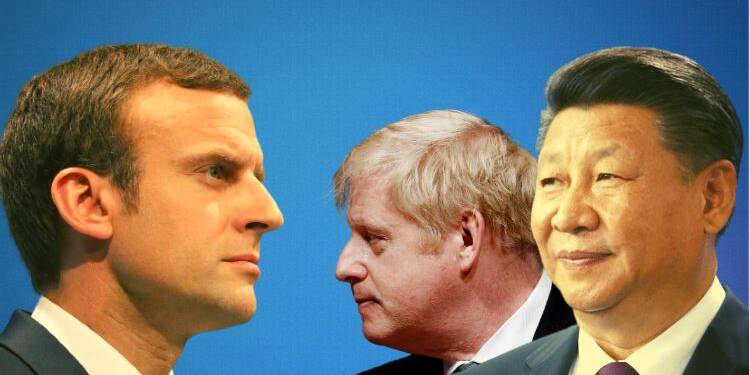 Since the Brexit, UK’s global and regional influence has been declining. It might be a substantial military power, but its influence and reach has now been overshadowed by the much powerful and active EU member state – France. On one hand UK has decoupled from EU, on the other hand France has been pushing the EU nations for greater cooperation. Both the UK and France are important powers in Europe, but the difference is that France is a rising power and UK is a declining one.

Boris Johnson is pushing to restart trade talks with China. The Department for International Trade has begun to organise ministerial meetings with the state in a bid to restore economic ties with China. British officials are now working towards holding a meeting of the UK-China joint economic and trade committee later this year. Such meetings were held annually until 2018 when relations began to sour between the UK and China. Chancellor Rishi Sunak has also requested the resumption of the UK-China Economic and Financial Dialogue.

The reaction from UK MPs

This decision by the Boris administration has sparked fury from some MPs within the Tory party. Following reports of the new economic dialogue, Iain Duncan Smith said that he will oppose any move to increase trade ties amid speculation over the treatment of Uyghur Muslims in Xinjiang, threats to Taiwan and growing influence in the South China Sea. He said, “If this government decides that they are going to kowtow to China by going over there and begging them to trade, I have to tell you that they can think again”.

He further said, “I make no bones about this: I will not let it rest if we start now, amid all the evidence of genocide, brutality, crackdowns on peaceful protesters, and go traipsing along there as though nothing happened. There’s no good them telling us that they’re going to clean up their act — because they never do”.

Tom Tugendhat, the Tory chairman of the Commons foreign affairs committee, agreed, saying, “The timing of the decision to relaunch trade discussions with China is surprising. The UK needs to make up its mind whether it wants a stronger economic relationship with China or whether it wants a new China strategy which reflects the challenge of trade coercion and human rights abuses”.

Why are Britishers unhappy with this decision?

There are many reasons why UK MPs and citizens are unhappy with this decision. The recent Chinese spy case, that was uncovered by the British intelligence agency MI5 is among the most popular reason for the bad impression of China in the eyes of Britishers. Also, the Uyghur Muslim genocide by CCP in Xinjiang, the Hong Kong human rights abuses, the unlawful South China Sea claims and the Taiwan invasion threats of China are among the other major reasons why the Britishers are not in favour of reestablishing trade talks with China.

Since the UK exited EU and France took over the EU presidency, France has been pushing great changes in EU. From an independent and autonomous foreign, defence and border policy to a common EU army, Macron is overshadowing UK in Europe through his robust, active, fast and decisive policies and diplomacy. On the other hand UK is busy in its domestic issues and is still suffering from the shocks and disruptions of Brexit. Recently, in an act to show its leadership in Europe, Macron traveled to Russia and Ukraine for peace talks and negotiations. It shows that France truly wants to take the leadership status from UK and project itself as the sole power in Europe.

It is quite clear that the dream of “Global Britain” that Johnson saw for the post-Brexit UK is falling. UK is no more a global power, it is rather struggling to keep its regional power status alive. As Boris administration is realising that UK may soon be without any allies or friends, it is trying to woo China and CCP to gain support and sustain UK’s declining economy.