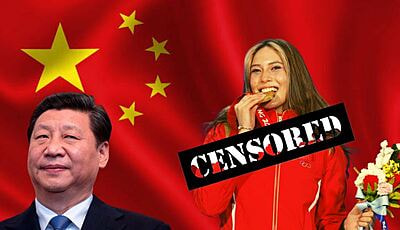 China has been poaching US sports personalities for quite some time now. Athletes like Eileen Gu, Jake Chelios, Jeremy Smith, Zhu Yi etc have already under the aegis of CCP. China uses its economic muscle and chequebook tactics to buy out potential sports champions from other countries. It all started in 2018 when Zhu Yi gave up her US citizenship to join team China.

The latest sports star from the US to join team China in the 2022 Beijing Winter Olympics is Eileen Gu. She is a US-born freestyle skier who has been part of the Chinese team since 2019. Before joining team China, she requested the International Ski Federation for a change of nationality as China does not recognize dual citizenship and the Chinese Consulate General in New York has already stated that Gu would have to gain permanent residency status in China to compete.

Even though Gu just became the youngest ever Olympic gold medalist in freestyle skiing, she is in the news for her comments on social media. On her Instagram profile, she made comments defending the Chinese internet censorship and restrictions. Ironically, in reaction to this, the Chinese authorities have now blocked her comments on the social media site. This comes at a time when the CCP is super active in blocking and banning any voice of dissent that rises within the communist hellhole.

It all started when a user commented on a post by Eileen Gu. The user wrote, “How can you use Instagram when millions of Chinese people from the mainland cannot, why you get such special treatment as a Chinese citizen?” He added, “That’s not fair, can you speak up for those millions of Chinese who don’t have that internet freedom?”

Replying to the comments, Gu wrote, “Anyone can download a VPN it’s literally free on the App Store”.

The reaction Eileen Gu is receiving

Many of Weibo’s users were quite outraged over Gu’s comment, pointing out that VPN services are not freely available on the App Store in China. And, as the Weibo post featuring Gu’s Instagram comment started to gain traction on the social network, it was subsequently censored by the great Chinese firewall.

Critics on Weibo have blasted Gu for being oblivious to the privileged position she is in, referencing what had made Gu such a controversial figure in the first place. Others, however, were irked by Gu’s comment, and invoked the phrase, “Why don’t they eat minced meat?” — A quote by a Chinese emperor taken to reflect his frivolous disregard for his famished citizens and his poor understanding of their plight. “Literally, I’m not ‘anyone.’ Literally, it’s illegal for me to use a VPN. Literally, it’s not freaking free at all,” one Weibo user said.

In his recent opinion piece, the former editor of the Global Times, Hu Xijin wrote, “Eileen Gu is just barely 18. She wants to be both Chinese and American but that may not be possible. In his PRC guidance to media, he writes, media should not emphasize the patriotic angle such as “she brings glory to China!”

Read More: CCP can organize the Olympics, but how to contain millions of vitriolic Han supremacist

It’s quite funny that a US athlete competing for China in the 2022 Beijing Winter Olympics was censored by the Chinese authorities for defending the CCP’s censorship on the internet. Well, it seems that Eileen Gu was earlier not aware of the truth of the great Chinese firewall, and now, after facing the wrath of the CCP by herself, she must be realizing her mistake of choosing China over the US in the 2022 Beijing Genocide Olympics.