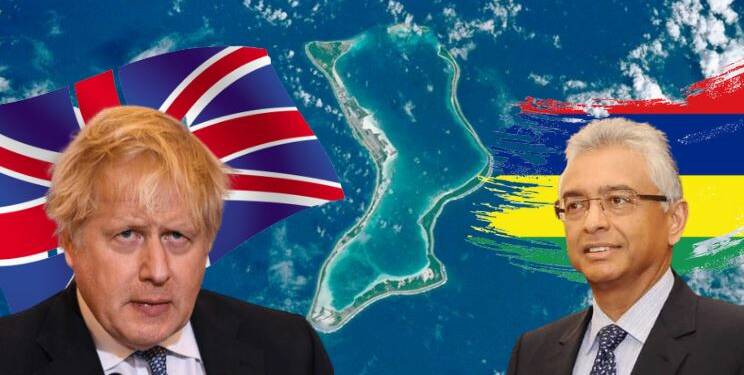 For centuries now, the United Kingdom has remained an occupying force on many landmasses across the globe. Being one of the foremost colonial powers, it captured many small islands around the world. One such island is the Chagos islands, located around two thousand kilometres away from Mauritius. The islands were once inhabited by about 2,000 residents. But, in the 1960s and ’70s, Britain evicted them from the island so that the U.S. military could build an airbase on Diego Garcia, one of the islands in the archipelago.

In a recent event, some Mauritian officials planted the national flag of Mauritius on the Peros Banhos atoll in the Chagos Islands. It’s the same island, whose residents were expelled by Britain half a century ago to make way for a U.S. military base. Several Chagos island’s former residents accompanied Mauritian officials on a voyage that also involved a scientific survey of a nearby coral reef. It was the first time they had set foot in the island since they were evicted by the  Britain. It is for the first time in 50 years that Mauritius has openly underlined its territorial claims over the islands by planting its national flag there.

What did Mauritius PM said?

According to a report, a message from Mauritius Prime Minister Pravind Jugnauth was played at the flag-raising ceremony, hailing the historic visit. In the message, the Mauritius PM said, “The message I wish to give out to the world, as the state with sovereignty over the Chagos archipelago, is that we will ensure a wise stewardship of its territory — over its maritime security, conservation of the marine environment and human rights, notably the return of those of Chagossian origin”.

He added, “It is a very emotional moment and a very historic time for us because we are able to rule in our own territory. We have already asked the UK to hand over these islands to Mauritius. It’s the right time for them to hand back the islands to us and abide by international law”. He also said that if the Mauritius flags were removed, it would be considered as provocation from the UK.

For many decades now, the former residents of the island have been demanding and protesting for their return to the island. The displaced residents have fought for years in the courts for the right to return to their home islands, which the UK calls the British Indian Ocean Territory. In 2019, the International Court of Justice and the United Nations General Assembly, both told Britain to give up control of the islands, which it held on to after Mauritius (a former British colony) gained independence in 1968.

The international court said in a non-binding opinion that Britain had unlawfully carved up Mauritius, an archipelago nation whose main island is some 2,000 kilometres off the southeast coast of Africa. According to the court, the island is a part of Britain’s old empire and should be now handed over to Mauritius.

Reacting to Mauritius recent action and claim, UK’s Foreign Office said on Monday, “The UK has no doubt as to our sovereignty over the British Indian Ocean Territory, which we have held continuously since 1814. Mauritius has never held sovereignty over the territory and the U.K. does not recognize its claim”.

What’s interesting is that several successive British governments have expressed regret about the way the islanders were removed but have not allowed them to return or heeded the non-binding international opinions. Though, in 2020, Britain said that it would cede sovereignty of the territory to Mauritius when it is no longer required for defence purposes.

Read More: Boris Johnson has just saved his chair with one clever decision

Mauritius, an island nation that is 119 times smaller than the UK has now challenged its hegemony. The former British colony has finally taken over the control of its rightful territory from the UK’s occupation. This is just another instance and example of UK’s falling power. A declining colonial power, that can’t even defend its claimed territories from being taken over by its former colonies. That’s what the Britain of today is.