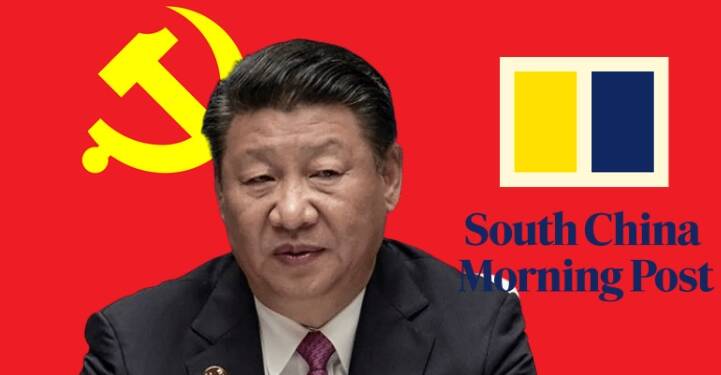 The time for the 20th National Congress of the Communist Party of China is nearing by the day. And with it, the anti-Jinping faction’s efforts to unseat Xi Jinping have also accelerated. All the Xi Jinping sceptics including the Shanghai faction have realised that this is the make or break opportunity and the question of their existence. While Xi Jinping has been on a witch hunt of his political adversaries and their economic backers.

These developments have consolidated the splintered opponents of Xi Jinping in the Chinese Communist Party and among their business backers. One of such people who have been wronged by Xi Jinping is Jack Ma, the founder of Alibaba Group and also a close associate of the Shangai faction.

Now, given the time is ripe, he has activated the biggest anti-Jinping sleeper cell, which is South China Morning Post (SCMP). This is all the more interesting, given, the paper is majority-owned by Alibaba.

By last year, the South China Morning Post had emerged as a freshly minted anti-capitalist publication right out of the Chinese Communist Party’s stable. While earlier, SCMP was considered a beacon of quality journalism across the Indo Pacific. The Xi led witch hunt unfortunately reduced itself into a publication that unquestioningly churns out Communist propaganda.

Particularly after the imposition of the draconian National Security Law by the CCP on Hong Kong – where SCMP is based out, the publication’s enthusiasm to question the CCP and expose its many excesses has taken a nosedive. In light of the hounding of Alibaba Group particularly, and the Xi Jinping administration going hammer and tongs against the e-commerce giant, the SCMP had increasingly followed the Chinese Communist Party line.

However, with the National Party Congress nearing, the publication has shed all the pretence of being an ally of Xi Jinping. It is now publishing articles and propagating the ideas which it had been self-censoring because of the fear of Xi Jinping. There are a number of articles that prove the observation. But for the sake of ease, let us take two examples:

According to experts and as published in SCMP, there is a widespread belief in China that the only way to advance in the Xi era is to demonstrate complete fealty to the leader. On Thursday, the US-China Economic and Security Review Commission received evidence from members of Congress.

Exhibit B: In China, buying trafficked women and children gets less jail time than buying illegal plants or animals (This article was published on 18th February.)

This article lays bare the reality of human life under the rule of Xi Jinping. It mentioned that you might face a seven-year prison sentence if you buy illegal plants or their by-products in China. Buying endangered animals might land you in prison for the rest of your life or perhaps kill you. However, in stark contrast, the maximum sentence for someone found guilty of buying a trafficking woman or child is three years in prison. If the court determines that the buyer did not abuse the trafficked person or obstruct rescue efforts, they may be sentenced to a shorter sentence.

This kind of development gives credence to the fact that SCMP has come out of hiding and has started on its aims.

Two factions within the CCP have dominated internal politics for the last five decades. Those two factions are CCYL (Communist Youth League of China) and the Shanghai gang. CCP leader Deng Xiaoping’s reforms in the CCP, brought in through the 1990s, facilitated the rise of internal politics in the communist party. It was supposed to be a healthy competition between the party factions, to prevent the party from steering on the path of authoritarianism. But it changed after Xi Jinping’s assumption in the secretarial office.

However, in his paranoia, Xi Jinping underestimated these factions. These rival factions are far from getting isolated or destroyed. They are pushing back and adjusting to new realities. One of the examples is the open defiance by the SCMP, a widely read paper that is owned by Jack Ma.

China was stealing Russian military technology, gets caught by Australia