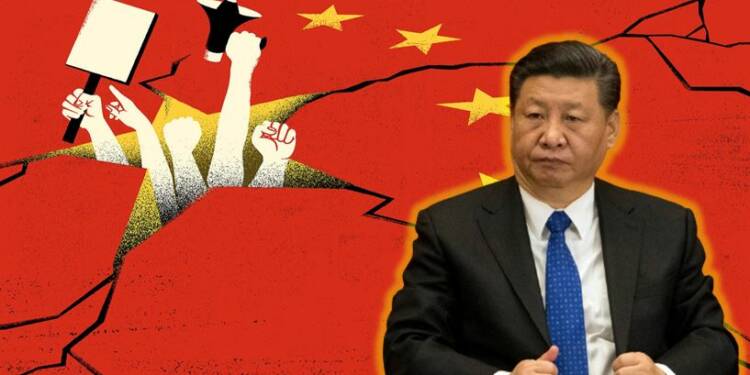 An authoritarian leader’s every action is driven by his political ambitions. Xi Jinping is no different. He wants to establish himself as the leader for life in China. Jinping has already diluted the CCP laws that deny third term to any party secretary and his purge campaigns have intensified.

Factional politics and the economic crisis:

Instead of eliminating them, such pre-emptive measures by the Jinping administration have only aggravated the internal power struggle in the CCP. Now, if we look at the ongoing economic crisis in China through the lens of this factional politics in the CCP, things suddenly become more interesting and easier to understand.

Also read: Jinping slashes CCP Members’ salaries by a third, a move that can be the end of the Dictator

Two factions within the CCP have dominated internal politics for the last five decades. Those two factions are CCYL (Communist Youth League of China) and the Shanghai gang. CCP leader Deng Xiaoping’s reforms in the CCP, brought in through the 1990s, facilitated the rise of internal politics in the communist party. It was supposed to be a healthy competition between the party factions, to prevent the party from steering on the path of authoritarianism. But it changed after Xi Jinping’s assumption in the secretarial office.

How did Jinping seek to destroy his rival factions?

Also read: China’s economy is set to contract and anti-CCP winds have begun blowing over Beijing

It’s not hard to understand that all of Xi Jinping’s initiatives introduced over the past year are meant to tighten his grip over power and annihilate his rivals. “Common Prosperity” and “the dual circulation policy” are two campaigns that make up the bedrock of Xi Jinping’s newborn economic policies. Making profits has been made a taboo in China now.

Businesses are getting weaker. The economy has already entered dangerous territory. But look at all these developments through the lens of internal CCP politics. Jinping’s rival factions are also getting weaker. Shanghai faction, which once enjoyed enormous sway over businesses and power, is losing its clout.

And that’s what concerns the Chinese president the most at this point of time. If any policy is making his rivals weaker and lesser dangerous, Xi Jinping will continue those policies, irrespective of the ramifications on the Chinese economy. This conclusion brings us to an interesting question: is this economic crisis in China being orchestrated at the behest of the unnerved Chinese President?

It is noteworthy that the Shanghai gang or the Shanghai factions has always enjoyed its sway over prosperous, or coastal provinces of China. So, by destroying businesses, Jinping seeks to weaken the rival factions. Jinping’s “common prosperity” is all about making the Chinese rich ‘poor’, and placing special emphasis on the rural economy. Interestingly, Xi’s policies will help the Xi gang strengthen its grip over rural China, and will weaken the CCYL faction that hails from the poorer part of the communist nation.

Also read: Jinping hits the panic button as Chinese investors move their money out of China

This is like killing two birds with a single stone. Both Shanghai and CCYL factions are seemingly being imperiled. On the flip side, the Xi gang is emerging and taking over the CCP. But there’s certainly more to it than what meets the eye.

These rival factions are far from getting isolated or destroyed. They are pushing back and adjusting to new realities. Alibaba Group, for instance, is now weaponising Xi Jinping’s “common prosperity” against the Xi gang itself. Mind the fact that Alibaba hails from the Shanghai faction. Alibaba, which at its peak was Asia’s largest corporation with an $860 billion market value, has plummeted more than 60% since. In essence, Xi Jinping destroyed Jack Ma and snatched Alibaba right from Ma’s palms.

Also read: ‘Offence is the best defence,’ Alibaba is back with an offensive strategy against Xi Jinping

But he is now staging a miraculous comeback with the strategy of “offense is the best defense” in mind. Jack Ma is rising like a phoenix from the ashes. Needless to say, things are about to get pretty ugly for the CCP now.  According to Bloomberg, Alibaba has unveiled a sweeping blueprint to grow its international business and delve deeper into an under-served 15 trillion yuan ($2.4 trillion) rural Chinese e-commerce market.

These are the signs of a brewing push-back from the Shanghai faction. Xi could have avoided this catastrophe by simply stepping down from the role of the CCP secretary next year. But this aberration by Xi Jinping has not gone down well with his rivals. And they are fighting back now. This may look like a negligible spark as of now, but this spark could very well morph into hellfire for Xi Jinping’s ambitions anytime soon.