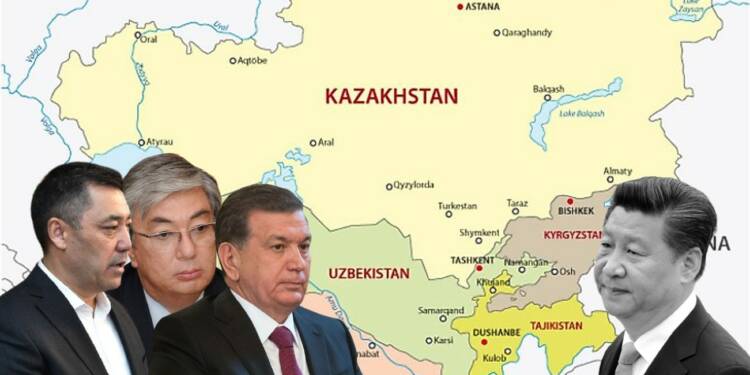 China’s Belt and Road Initiative is a global infrastructure development project. If we were to define it, one word would pretty much sum it all up – exploitative. BRI is a vehicle using which the Chinese Communist Party debt-traps economically weak and developing nations. It was launched in 2013 by Xi Jinping and has ever since formed a pillar of China’s international diplomacy and foreign relations. But around the world, BRI is beginning to face opposition and pushback, and Xi Jinping isn’t happy.

Central Asia – the region whose countries came into being after the disintegration of the Soviet Union, has begun leading the crusade against China’s BRI. As a part of its domination strategy, Chinese FDI in the five Central Asian countries stood at 14.7 billion US dollars, that is, 1.2 per cent of Beijing’s total investments in Asia by 2018. China has put in more than US$17 billion in projects in Kazakhstan, around US$4 billion in Uzbekistan and Kyrgyzstan, and US$710 million in Tajikistan since 2013.

Central Asian countries have had enough of China. As a Russian sphere of influence where India has much interest, China really swooped in to exploit the region. But now, China is being tamed by the countries of the region, with the support of Russia and India. You would be surprised to know, but when it comes to Central Asia, the U.S. and Russia have a tacit understanding of working together for inhibiting the growth of China.

Sounds cool, right? And then, the five Central Asian countries sent their foreign ministers to India on Saturday to discuss issues crucial to the region with New Delhi, with a special focus on the situation in Afghanistan. Now, we know for a fact that India and Russia are behind these five countries showing the finger rather unapologetically to China. India, Russia and even the U.S. have a mutual interest in keeping China out of Central Asia since the region is pretty much the crossing point of the eastern, western, northern, and southern worlds.

China trying to humanise itself:

According to a report by the Carnegie Endowment for International Peace think tank, instead of large-scale infrastructure projects, Beijing’s emphasis has shifted towards helping Central Asian economies industrialise. The South China Morning Post reported how Chinese companies increasingly have to adapt to the demands of the region’s governments and citizens who want more jobs, exports and skills training.

Central Asia is no longer allowing China to make it a pawn of China’s geopolitical ambitions. Therefore, China wants to save its fortunes. Nobody is falling for China’s desperate attempt at saving its own exploitative career in Central Asia.

Read more: Ever thought that China could get kicked out of BRI? Well, it has begun in Central Asia

Jessica Neafie, an assistant professor of political science and international relations at the Nazarbayev University in Kazakhstan said: “As China faces more pressure from other powers it will be forced to pay more attention to local needs or lose its influence and energy sources.” She added that China is focused on keeping Central Asian governments happy amid increasing pressure from the United States and Russia to extend their own power and influence in the region.

From laying massive pipelines, building transport corridors, refineries, power plants and other massive assets in exchange for recipient nations’ sovereignty, China has now been forced to focus on skill development, build local and small-scale industries, and hire workers from the host nations. This runs contrary to Xi Jinping’s vision of creating a hegemonic Chinese presence across the world, especially in Central Asia.

All the money China has pumped into Central Asia has effectively been for nothing. It has amounted to nothing. Now, China has turned a new leaf, and with the current strategy, its immediate goals of turning countries of Central Asia into debt-ridden client states will not be achieved.