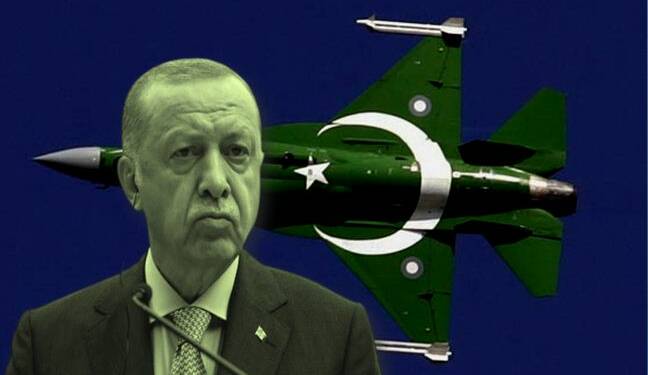 Turkey, which is in search of a large fleet of modern fighter jets to replace its ageing old F16’s is zeroing on China-Pakistan JV product JF-17. Turkey’s ageing F-16 fighter jets seem to be hampering its ambitions of becoming a dominant military power in the region. The purchase of Rafale by its arch-rival Greece also has created a state of exigency in Ankara, forcing it to move ahead with its plan to upgrade the fighter fleet.

Turkey’s options are limited. The US, who can offer F35, latest blocks of F16’s or even FA-18’s have backed off because of Turkey’s S400 deal with Russia. Despite being a NATO member, Turkey was sanctioned by Washington under the CAATSA. It was also expelled from the F-35 Joint Strike Fighter program.

France with its Rafale is far from an option because of the ensuing sour relationship Ankara holds with Paris following the latter’s Rafale deal with Greece. The Eurofighter Typhoon is also out of the list because of the US sanctions on Ankara and the involvement of several pro-US European countries in the deal. So, Turkey is only left with two options, one being Russia and the other being China.

Also Read: If Biden sells F16s to Turkey, it will be a direct offensive against Greece and France

Why Turkey will not go with Russia?

The US has already imposed several sanctions on Turkey. The country’s economy is suffering from severe inflation, joblessness and unemployment.  Already in a dire strait, any further sanction will fasten up the collapse of the Turkish economy. That’s the biggest reason why Ankara is not willing to go with Russian options like Su-35 or Su-57.

Also, Turkey’s old acquaintanceship with western fighter jets won’t make it easier for them to adapt and integrate with a different Russian jet. The integration, training, compatibility and logistics would raise the overall acquisition cost of the Turkish Air force.

China and Pakistan jointly developed and assembled Jet JF-17, which is probably the only option that Ankara will now rely upon. The jet is cheap, affordable and low on maintenance. The overall acquisition cost of the fleet would most probably be affordable for a failing economy like Turkey. Also, the deal with Pakistan and China won’t get affected by the US sanctions.

Pakistan – Turkey relations have also developed in recent times. Pakistan, which acts like a poodle of China, has now found a new godfather in Erdogan. Ankara supports Pakistan monetarily and diplomatically in its every claim and agenda. In return, Pakistan can support Turkey with its JF-17 (More like Junk Fighter).

It is truly a shame for Erdogan that in his leadership, Turkey has declined to such a level that it is forced to buy a “designed in China and assembled in Pakistan” fighter jet. Turkey, which saw the dream of operating advance blocks of F16 along with 5th gen F35, is now going for a China-Pak JF-17.