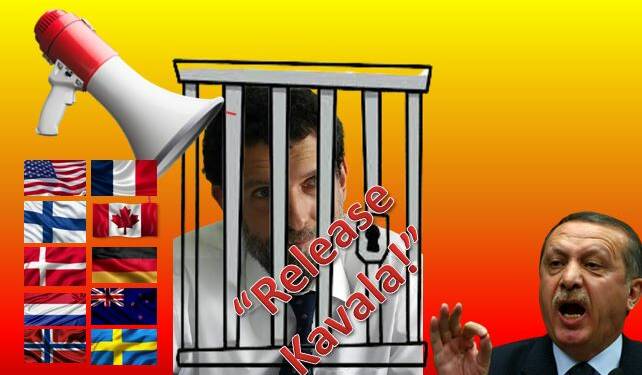 If the catastrophe had a face, it would not have looked much different than that of Erdogan.

Turkey, one of the few Islamic countries sitting on the elite G-20 list, is witnessing its fortunes sinking at a blistering pace under President Recep Tayyip Erdoğan. Recently, the country was grey-listed by the Financial Action Task Force (FATF) for violating money-laundering norms and funding terrorist activities.

And now, Erdogan risks spoiling Turkey’s ties with ten important countries just for the sake of keeping his political interests afloat. Recently, envoys from ten countries namely the United States, Canada, France, Finland, Denmark, Germany, the Netherlands, New Zealand, Norway and Sweden released a rare joint statement calling for Osman Kavala’s immediate release from the detention. The calls by the envoys irked Erdogan so much that he wasted no time in demanding their immediate removal from the ambassadorial posts.

Who is Osman Kavala?

Osman Kavala is a Turkish businessperson, activist, philanthropist and political prisoner. Osman Kavala has supported numerous civil society organizations since the early 1990s. Owing to his remarkable contribution to numerous civil society organizations and human rights groups, he was detained on 18 October, 2017 after getting accused of being a “business tycoon with a shady background” and having contacts with the “Gülenist Terror Group”.

He is currently incarcerated under the provisions of several articles with allegations ranging from acting against state interests to putting national security at risk.

He has also been accused of attempting to overthrow the government, stemming from alleged involvement in the 2013 anti-government Gezi protests and the 2016 coup attempt.

However, the human rights group and several international court rulings defy this narrative. For instance, on March 2020, the European Court of Human Rights said in a ruling that there was no sufficient evidence to support the accusations against Osman Kavala and that “the prosecution’s attitude could be considered such as to confirm the applicant’s assertion that the measures taken against him pursued an ulterior purpose, namely to reduce him to silence as an NGO activist and human rights defender, to dissuade other persons from engaging in such activities and to paralyze civil society in the country.”

Why does Erdogan feel threatened by Osman Kavala?

Erdogan’s tenure has witnessed a drastic fall in the country’s economy and international stature. Also, Turkey’s democratic institutions have fallen prey to his ambitions of resurrecting the Islamic caliphate in the region. Turkey’s human rights record has remained tragic under his reign, and his administration has merely shown any intention to mend its ways.

Hence, Kavala’s release at this tender moment could severely harm Erdogan’s political career and his presidency. So, the calls for his release are proving more than enough to make Erodgan lose his cool and issue a grave threat to expel the ten envoys from Ankara, which could further aggravate his political problems.

The joint statement issued by ambassadors said, “The continuing delays in his trial, including by merging different cases and creating new ones after a previous acquittal, cast a shadow over respect for democracy, the rule of law and transparency in the Turkish judiciary system.” The Turkish foreign ministry responded with accusations of the ambassadors crossing “red line” and behaving irresponsibly.

Erdogan himself told reporters that he won’t like to host such diplomats with intentions to meddle in Turkey’s domestic affairs. “I told our foreign minister: We can’t have the luxury of hosting this lot in our country. Is it for you to give Turkey such a lesson? Who do you think you are?”

Are the ten countries trying to unseat Erdogan?

Make no mistake, Biden hates Erdogan from the core of his heart. Joe Biden despises Erdogan for his “Autocratic” regime and his dangerous consolidation of power over the last few years. In an interview with New York Times, Biden once said that “the US should seek his ouster by backing Erdogan’s opponents. He has to pay a price.” So, when Biden came at the helm in January this year, Erdogan knew he had to brace for a rockier relationship with the US for the next four years.

Read More: ‘Erdogan will pay a heavy price,’ Biden’s policy on Turkey could be more punitive than Trump’s

And now, Erdogan is indeed facing the heat in the form of FATF putting up his country on the grey list and the ten countries launching a diplomatic offensive against the president over the contentious case of Osman Kavala. With plummeting economy and sinking approval ratings, it’s definitely going to be a cakewalk for Erodgan’s rivals seeking his ouster from the Presidential office.