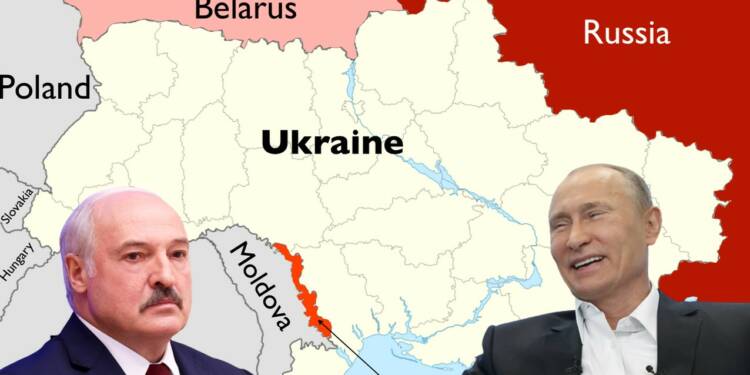 The West is too preoccupied with Ukraine these days. The Russian military is hounding the US-led eastern European nation and Kyiv could be toppled by Moscow anytime now.

In this Ukraine-Russia crisis, the indispensable role of Russia’s neighbour Belarus can’t be given a miss! Today, Belarus is inundated with Russian military equipment and defence forces.

Russia amassed nearly 30,000 troops in Belarus before ordering an invasion of Kyiv. You may notice Russia has cunningly tightened its grip over Belarus even as winds of war begin blowing in Ukraine.

The developments that occurred over the past few months suggest Russia may already have politically annexed Belarus before undertaking the Ukraine adventure. And if everything goes as planned, Minsk may also fall in Russia’s hands along with Kyiv after the Ukraine crisis is over.

It is interesting to note that Belarus had proposed some radical changes in its constitution last December, which can serve as a prelude to the complete reunification of Belarus with Russia.

The proposed changes effectively erase the country’s nuclear-free status and neutrality. The new military doctrine, which is yet to be made public, would enable further integration between the militaries of Belarus and Russia.

Adding to that, new changes will also guarantee unbridled powers to President Alexander Lukashenko. The subservient president is doing everything to please Putin. The Belarusian military is fighting along with the Russian military as Minsk looks ready to brave western sanctions.

Lukashenko last year even suggested Russia deploy its nuclear weapons on Belarusian soil and the proposed changes in its constitution will pave the way for the same. It looks like Minsk is already being operated by Russian masters from Moscow.

But why does Lukashenko have to follow Putin’s diktats? The reason is simple! Lukashenko loves his chair like any other political leader, and he just can’t survive without Russian auspices. Lukashenko weathered the biggest political crisis of his presidency last year. Military aid from Russia was brought in that literally rescued Lukashenko’s fortunes. Then miraculously, he won the August presidential elections, and his regime stayed afloat.

No prizes for guessing Putin had just saved his chair. One thing that keeps Lukashenko clung to his chair is the generosity being showered upon him by Vladimir Putin. So, it would be suicidal for him to reject Putin’s military offence against Ukraine.

As fantastical it may sound, Lukashenko had himself agreed to merge his nation with Russia when his presidency was faced with seemingly impregnable challenges. “The union of Belarus and Russia is an asset that should be preserved, augmented and passed on to future generations,” the Belarusian President was heard saying last year.

Even in the late 1990s, Lukashenko and the then-Russian president Boris Yeltsin had agreed to create a Union State – a merger of Russia and Belarus. Lukashenko was hopeful of replacing Yeltsin as Russia’s next president, but Lukashenko backtracked after Yeltsin chose Putin as his successor.

30 years down the line, Lukashenko is finding himself politically paralyzed by Russia. Russia has already annexed Belarus militarily and politically, and now the economic annexation will also take place once the West announces sweeping sanctions on Belarus.

Ukraine has served as a key market for the Belarusian economy. Once Kyiv falls into Russia’s hands, and the west imposes sanctions on Belarus, Minsk would have no choice rather than intensify its economic and political cooperation with Moscow.

So, the current crisis creates a golden opportunity for Russia to further subjugate Belarus – and, possibly, annex it according to the stipulations of the Union State. And this annexation will take place right under NATO’s nose, without even Russia feeling the need of firing a single bullet!