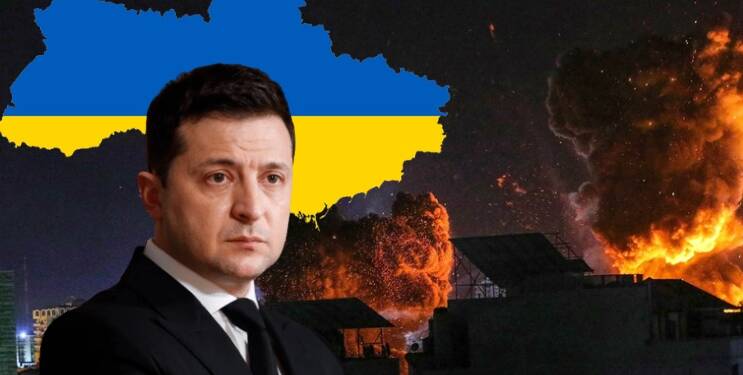 Russia and Ukraine are at war. And there is a huge build-up regarding what may be about to happen. Some say the war is going to continue for several days and others feel that other powers might get roped in. But I am here to tell you what exactly will happen in the next 48 hours.

Russia’s full-scale invasion has taken Ukraine by surprise and the Russian military is now looking to take Kyiv.

Right now, the Ukrainian military is showing some resistance. On the other hand, Western media is flooding the internet with posts turning Ukrainian President Volodymyr Zelenskyy into a virtual hero. But all this enthusiasm is going to subside pretty soon.

Zelensky rejected U.S. offer to evacuate him from Kyiv – @washingtonpost.

President is in the capital, leading our nation through its darkest hour.

Earlier today, he told NATO leaders he might be killed, he’s not lying. I have so much respect for him. True leader! pic.twitter.com/ug6APbQWWH

Ultimately, the Ukrainian President is going to flee Ukraine and resurface in some other part of the world. And the West will rebrand him as a social media influencer and motivational speaker.

What happens in Ukraine?

And what about Ukraine? Will it become a Russian-held territory? Well, no. Putin is only interested in the Russian-speaking Southeast Ukrainian region of Donbass and the strategic Snake Island. The Russian President isn’t eyeing the entire Ukrainian territory.

All Putin wants to do is to overthrow the pro-West Zelenskyy regime in Ukraine. NATO has expanded rapidly in Eastern Europe after 1997 and it seems that Putin drew a red line when it came to Ukraine.

Russia has effectively achieved its territorial goals. Now, all it needs to do is to get the Ukrainian military to overthrow Zelenskyy’s regime and get some lesser-known Ukrainian leader or military boss into signing a favourable deal.

The deal will be drafted by Russia and Ukraine, being the losing side, will have to accept it. NATO will condemn it, of course, but won’t be able to do anything else.

Read more: The irrelevance of NATO is now out in the open

Once Russia takes control of Kyiv and signs a deal of its own choosing with a Ukrainian representative, it will start wrapping up its military operation.

There will be some predictable images of Russian soldiers taking a stroll in Kyiv’s streets, being welcomed by a group of women, tending to the wounded and playing with a group of small kids.

Later, Putin will declare Ukraine a blood brother that unfortunately went to war with Russia due to Biden administration’s aggression and NATO’s inanity. However, Moscow will accept a changed Kyiv with open arms.

Read more: It was Biden who pushed Ukraine towards an unwinnable war and then did nothing

Russian troops aren’t planning a long stay in Kyiv. Once the diplomatic formalities are done, they will withdraw. Russia’s borders will however become even longer and extend to the Luhansk and Donetsk provinces.

The Snake Island, which is strategically located, at the edge of Ukrainian territorial waters in the Black Sea, too will be annexed by Russia.

Next 48 hours in Ukraine and the world – A thread

Gradually, the world will return to normal. The EU and the US will keep condemning Moscow. But Moscow and Kyiv will not be at loggerheads any longer. And the entire episode will go down as a major Russian victory.