With a massive increase in its defence budget, Germany begins the end of NATO 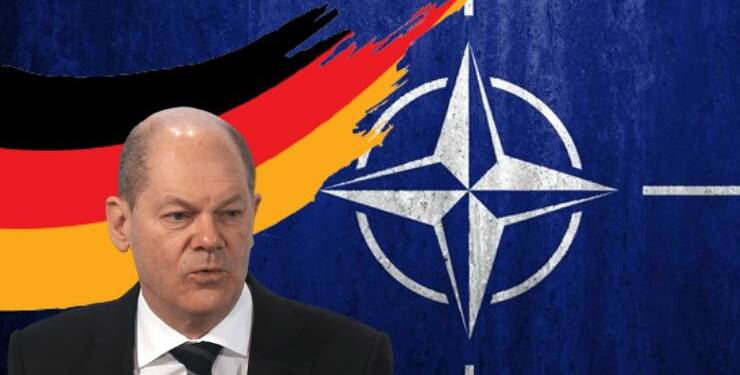 The Russian invasion of Ukraine is a harsh reality check for Europe- the United States is going to keep pushing you into war but it will not save you when the big moment comes. And NATO? Well, it is a paper tiger that has never really proven its worth. Germany has realised this when there’s still some time.

So, German Chancellor Olaf Scholz is now abandoning post-war pacifism, shedding security dependence on the United States of America and is making Germany a self-reliant military force. And Scholz has started the process of ending the NATO with a record defence budget in modern Germany’s history.

In a historic announcement in the lower house of the German Parliament, Olaf Scholz said that a fund of €100 billion ($111.58 billion) will be set up in an attempt to boost German military firepower.

And we know that this is a part of Germany’s attempts to go self-reliant in the security sector, because he spoke about protecting Germany and not about emboldening the NATO. Scholz said, “It is clear that we must invest significantly more in the security of our country, in order to protect our freedom and democracy.”

Read more: US wants a NATO-like military alliance in the Indo-Pacific and it means the end of NATO’s relevance

He called it “Germany’s historical responsibility” to ensure that the Russian President Vladimir Putin “does not turn the clocks back”.

Scholz has vowed to increase long-term German defence spending year on year by over 2% of the GDP. Currently, Germany spends about 1.5% of its economic output on its defence sector. Scholz is actually looking to make a special fund for military spending a Constitutional commitment in order to ensure that it becomes a permanent feature of German polity.

Now, you would be wondering why Germany spending heavily on its defence forces is a big news. After all, Germany is the biggest economy in Europe and is far ahead of both the UK and France in terms of economic prosperity. So, what is the big deal if it is spending billions on its military?

Well, it is special. Let me take you back in history. Remember the Second World War? Germany was then at the centre of a global backlash, because of all the war crimes that the Nazis under Adolf Hitler had committed. After the end of the Second World War, Germany had to face a lot of humiliation because of obvious reasons.

Therefore, even after Germany got reunified in 1990, the country’s electorate developed a strong aversion to war and militarisation. There was a strong pacifist sentiment in Germany’s political circles, which is why the country resisted American demands to hike its defence spending to 2% of its economic output.

Merkel thought that a US-led NATO is in any case providing security to the European Continent, so Germany can focus on trade, investment and economic growth instead.

Read more: France is planning to end US-led NATO as we know it

Things are however changing and there is a clear course correction in Berlin’s policy.

Germany could look for a European army

However, all the parties that compose the coalition government steered clear of mentioning a European army in their coalition pact. After all, no politician in Germany could dare go against the strong pacifist sentiment in the country.

However, with Russia invading Ukraine, the ruling coalition gets an excuse to explain why it wants to go self-reliant in the security sector. The coalition can now actually push for a European army without being too worried about any backlash.

The German defence budget is thus historic. It actually marks the beginning of the end of NATO, even as Europe looks for a European solution to uphold its security interests.

It is official: Ukraine is holding citizens of other countries hostage, to secure its own well-being