The German boycott of China‘s Beijing Olympics is here 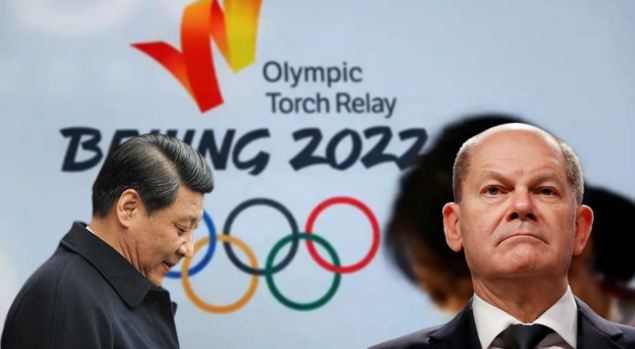 Germany has a new Chancellor, Olaf Scholz, and a new coalition government has taken charge of Germany with the single mandate of making China’s life miserable. The Chinese Communist Party (CCP) has been having a blast in Germany for the past two decades.

Now, China is all set to be kicked in the shins by Germany’s new coalition government. The first major move has been made. The Beijing Winter Olympics have become a prestige issue for Xi Jinping and the Chinese Communist Party. So, guess what Germany’s new government has decided to do? It has boycotted the Winter Games diplomatically!

The new government in Berlin comprises Germany’s Social Democrats (SPD), Green Party (Greens) and Liberal Democrats (FDP). The new German government has its foreign policy led by the Greens Party – which is by far the most China-sceptic party in Germany.

Its leader, Annalena Baerbock has been made Germany’s new foreign minister, and she is not pulling her punches in any manner.

In what seems to be the first major step that the new German government has taken to decouple from China, Foreign Minister Annalena Baerbock will not attend the Beijing Winter Olympics in February.

A foreign ministry spokesperson quoted Foreign Minister Annalena Baerbock, as saying that she was a big sports fan but she would not visit China for the Olympics during that time.

Baerbock also mentioned how no foreign minister before her had not attended the Olympic Games. So, the message is clear. Had the Winter Olympics been taking place at any other capital city other than Beijing; Germany would gladly attend.

However, given China’s human rights record, its blatant disregard for international rules and its increasing aggression across the Indo Pacific, Germany seems to have decided against granting legitimacy to the Beijing Winter Olympics by sending its diplomats to the Chinese capital in February.

Meanwhile, German Chancellor Olaf Scholz is still holding talks with European partners to decide whether the EU should officially declare a diplomatic boycott of the Beijing Winter Olympics.

Germany Takes the First of Many Anti-China Steps

The diplomatic boycott of the Beijing Winter Olympics by Germany comes after the United States, United Kingdom, Canada and Australia announced similar boycotts. Japan too has decided to not send any diplomats to the Gala sports event.

In essence, Germany has taken the first step of dissociating from China. Under former Chancellor Angela Merkel, China found its foremost partner in Germany. Within the European Union, Germany’s nauseating friendship with China had annoyed many nations.

However, with a new German government in place, China’s bad days have arrived. Its EU expedition is now over, and Xi Jinping now has no friends in Europe.

In a ‘Coalition Agreement’ signed by the new German government, it has been laid out that China will be treated as a “systemic rival”. This is for the first time that Germany has referred to the red rogue nation as a systemic rival.

The agreement also commits to working out a “comprehensive China strategy” as part of the joint EU-China policy, “to be able to realize our values ​​and interests in the systemic rivalry with China.”

The document also calls for the international participation of “democratic Taiwan”, points to human rights violations in Xinjiang, and demands a restoration of the “one country, two systems” policy in Hong Kong. Most importantly, the coalition agreement – which has laid out the new government’s broad policies, targets China by calling for greater scrutiny of foreign investments in Germany’s critical infrastructure.

Xi Jinping’s Woes Are Yet to Begin Taking Shape

As it is evident, Xi Jinping’s troubles are just beginning to descend upon him like lightning bolts. With Germany in no mood to maintain a friendly relationship with China, Xi Jinping has lost a major democratic friend – which frankly, was one of its last in today’s world.

Now, China is all on its own. Meanwhile, the growing number of countries announcing diplomatic boycotts of the Beijing Winter Olympics, or even refusing to send their diplomats without actually announcing a boycott, is bound to take a political toll on Xi Jinping.

A lot for Xi Jinping depends on how he can hold the Beijing Winter Olympics. Politically speaking, the Chinese Communist Party seems to have decided to take a test. And the Winter Games being a roaring success is a major aspect of that test. If they are not, Jinping might simply be dumped next year as China’s President.

Jinping would have hoped for Germany to stand by him in such distressing times. But that has not happened, and the Chinese President is terrified now.