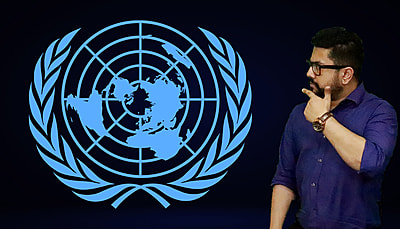 I come from India, home to 1.38 Billion People, home to Sanskrit – the oldest language, home to the oldest inhabited cities and home to Hindu Dharma – the oldest civilization. We have more than 400 rivers, more than 4000 cities and more than 400, 000 villages. Our borders touch the mighty Himalayas in the North, the Arabian Sea in the west, the Indian Ocean in the south and the Bay of Bengal in the East. At its prime, India stretched from Singapore in the East to Syria in the west. You see there is a reason India is called not just a country but a subcontinent. And these unique features of our geography and culture have taught us to never stamp our cultural supremacy on anyone. So, I would, with folded hands, ask the esteemed United Nations – Who the fuck do you think you really are?

I keenly followed American and British coverage of the Russia-Ukraine war and I could find a common theme in both coverages; They extensively ranted about white men with blue eyes fighting white men with blue eyes. And this rascality was limited not just to one publication, the same line was parroted by one godforsaken portal after another, one effing channel after another, one media twat after another. And then the giant arsehole (otherwise known as the United Nations) went ahead and conducted an emergency meeting of the United Nations General Assembly to condemn Russia’s aggression against Ukraine. Why may I ask? The answer to a ‘Why’ from a brown man is likely to fall on ears clogged by horseshit. So, I will give myself the opportunity of answering myself.

Let’s just take the List of battles in the 21st century as an example to prove the UN’s racism. The US invaded Iraq. The US invaded Afghanistan. The US invaded Syria. Millions of Iraqis, Afghans and Syrians perished. The United Nations never thought about the need of conducting an emergency UNGA Session.

In 2002, South Korea and North Korea fought a limited war. Hundreds died. The United Nations never thought of the need of conducting an emergency UNGA Session. 300,000 men perished in the War in Darfur, 100,000 in the second Congo war, 377,000 perished in Yemen, and over 100,000 got killed in the Tigray War. The United Nations never thought about the need of conducting an emergency UNGA Session. And if we talk about the wars before 2001, then India alone has featured in 3 major wars against Pakistan and 2 wars with China. India loses its brave soldiers to ambush attacks by Islamic terrorists almost every day. There were never any emergency UNGA Sessions for India to condemn Pakistan or China.

Read more: Both China and India abstained from the anti-Russia UNSC resolution, but for two totally different reasons

So, what is so special about the Russia-Ukraine war? The death toll hasn’t crossed 1000. No cities have been carpet-bombed. There is no large scale civilian killing. There is nothing out of the ordinary, just 2 countries squabbling over some petty disputes. There is nothing for an organization that calls its “United Nations Organization” to conduct an emergency meeting unless it is to show the fact that the colonial era is still not over. And while the balance of power may have shifted from the Atlantic Ocean to the Indian Ocean, the firmware of the lawmakers in the west is still awaiting a critical update. Laughable.

The emergency UNGA session was of course NATO’s attempt at whitewashing itself after the Russia-Ukraine debacle but at the core of it lies a message that the importance of white skin supersedes all other shades of skin. It’s racist but it is the reality. From a country that wrote Kamasutra, I could suggest a hundred ways to the lawmakers in the west to go fuck themselves, but I will end this with a Namaste. May Paramatma (Supreme Being) give you peace and wisdom to overcome this ailment.