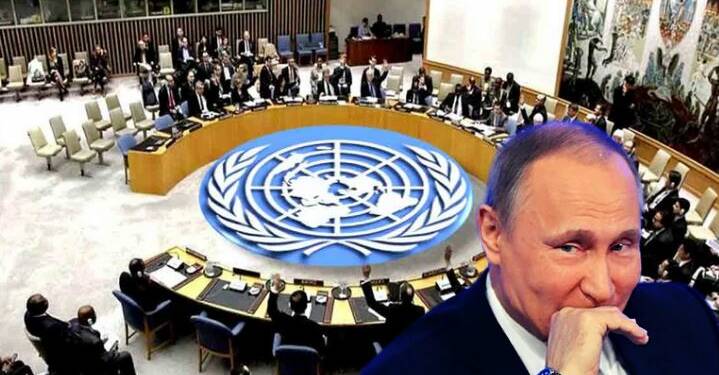 After the Russian invasion of Ukraine started, the West has been doing some really strange things like cancelling vodka, Russian athletes and Russian cats

The International Feline Federation has banned Russian-owned cats from competing in its shows, stating that it 'cannot just witness these atrocities and do nothing.'

In addition, no cats bred in Russia can be imported and registered in a FIFe pedigree book. pic.twitter.com/PrDzz8XqRa

And now, things are going over the top, as the West could be preparing to take away Russia’s permanent seat at the UNSC.

There are some things that we take for granted and one of them is the fact that there are five permanent members at the UN Security Council who can veto any resolution brought before it.

But Western diplomats could be trying to change it. They want to take away Russia’s permanent UNSC seat. So, will Russia lose it? No. Why? Let me tell you.

How the bizarre idea came up?

But before we discuss anything else. Let us find out how this absurd and impractical idea of taking away Russia’s permanent seat at the UNSC came up in the first place?

The West evidently became furious after Russia vetoed a US resolution against the military operation in Ukraine. The Western diplomats then started saying that “administrative reform” was needed at the UN, so that “aggressor nations” cannot veto sanctions against themselves.

Obviously, administrative reform is needed. But how does kicking out only Russia help? What if China launches an invasion against Taiwan? Won’t China veto a resolution against itself? Or what if the US suddenly feels that it needs to invade another country and find out ‘weapons of mass destruction’? Won’t the US too veto a resolution against itself? But these are discussions for another day. Let’s find out what the West is planning against Russia.

An effort is underway to challenge Russia’s right to hold a permanent UNSC seat. It is being said that the seat belonged to the erstwhile USSR and Russia inherited it illegally. Echoing the Western narrative, Ukrainian President Volodymyr Zelensky too said that Kyiv “demands” removal of Russia from the UNSC.

And Western diplomats have actually paid heed to Zelensky’s remarks. They are planning to draft a legal argument about the “illegitimacy” of Russia’s presence in the UNSC.

Why Russia’s permanent UNSC seat cannot be taken away?

The UN Charter has no mechanism to remove a permanent UNSC member, which explains why it is called ‘permanent’. To put it bluntly, any attempt to remove Russia’s permanent seat in the UNSC would be completely illegal.

And when it comes to Russia succeeding USSR as a permanent UNSC member, it wasn’t an ‘illegitimate’ move. In 1991, the Alma-Ata Protocol was signed by a majority of the former Soviet Republics. The Protocol ended the erstwhile Soviet Union and also declared that Russia would take over the Soviet Union seat at the UNSC.

And even if we keep the UN Charter aside for a moment, removing Russia from the UN simply doesn’t work. What was the purpose of the permanent seat in the first place? Allowing representation of the two different blocs, right? So that both sides have the luxury of vetoing wrongful actions by the other side.

This is how world peace was supposed to be maintained and the UN was supposed to uphold a rules-based order. Now, if you take away Russia’s permanent UNSC membership, the UN becomes a tool in the hands of the West to bully others. It will become a larger version of the NATO and Russia might as well abandon it.

The next thing we know, the UN ceases to function as a world regulator and falls apart, much like the League of Nations. And no one wants to see that happen, except those who want to take away Russia’s permanent seat.

Read more: League of Nations moment: The United Nations must be disbanded in a post-coronavirus world

Yes, the UNSC needs reform. But that means adding more countries like Germany, Brazil and India that represent present-day multipolar world. Removing Russia will only make UNSC unrealistic and useless.

So, trust me when I say this. Russia is a permanent UNSC member and it is never going to lose its permanent seat.