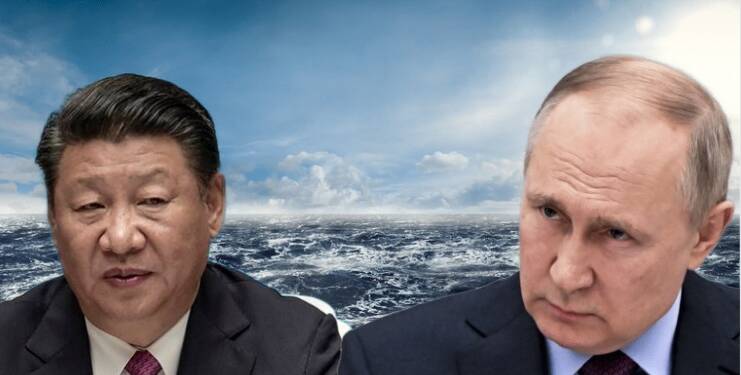 China’s Belt and Road Initiative in Europe, for all practical purposes, stands disbanded. Do you know why? Because the ongoing war in Ukraine has jeopardised the security of Eastern Europe as a whole. A pillar of China’s BRI in Europe was the New Eurasian Land Bridge. This is a railway corridor that crosses all of Eurasia — running through Kazakhstan, Russia, and Belarus. I explained previously how Russia’s invasion of Ukraine had delivered a whopping $75 billion jolt to China. Well, as it turns out, that’s not all! Russia has some bigger plans to ruin China.

Do any of you realise what game Russia is playing with China? Let me tell you.

There is this thing called the “Northern Sea Route”. Rings any bell?

The Northern Sea Route (NSR) is a shipping lane between the Atlantic Ocean and the Pacific Ocean along the Russian coast of Siberia and the Far East. Essentially, the Northern Sea Route is located above Russia. Russia is the most important power in the Arctic, followed by the United States. And Russia has some big plans for the Arctic. These plans would have been difficult to execute if China’s BRI in Europe served as an alternative trade route between Asia and Europe.

You see, if China’s BRI in Europe was allowed to remain a viable trading route, it would serve as a stiff competitor to the Northern Sea Route. Annual trade via the New Eurasian Land Bridge was expected to reach $100 billion a few years down the line.

Instead of utilising the Northern Sea Route, many goods transporters would choose to move their products using this Chinese corridor which runs across Eurasia.

Interestingly, the BRI project passes through Russia. This means all goods transported to Europe using this corridor pass through an extensive Russian landmass. Now that Russia has been hit with stringent sanctions, European markets will no longer be able to trade via the Chinese railway corridor.

Read more: China loses annual business of $75 billion due to the Russia-Ukraine war

The Arctic, however, is not “Russia’s property”. It is open for all – much like the Suez Canal. So, despite Russia being slapped with sanctions, a few years down the line, the Arctic region will become an arterial shipping route for all countries.

As reported by TFIglobal, on the Taymyr peninsula, Russia is currently building a $110 billion mega-port. This project, which will include the country’s largest Arctic oil terminal, is so large that it has been dubbed the largest project in the modern-day global oil industry. According to news reports, approximately 19,840 tonnes of heavy machinery, living quarters, and communications equipment have already been delivered to the site, and the project is expected to deliver 27.5 million tonnes of oil by 2025 once fully operational.

By 2025, the port will be able to deliver 25 million tonnes of oil, and by 2030, the capacity will increase to 100 million tonnes. This port will result in a 2% increase in the Russian GDP. Do you now realise why Russia is taking all the sanctions in stride? It knows that in a decade or two, the Northern Sea Route will help the country become an economic and transit hub.

The invasion of Ukraine, therefore, has ended up serving many interests of Russia. Most importantly, Vladimir Putin has dismantled China’s BRI in Asia and Europe. The stage is now set for him to shift international trading routes from the Indian and Pacific Oceans to the icy waters of the Arctic.