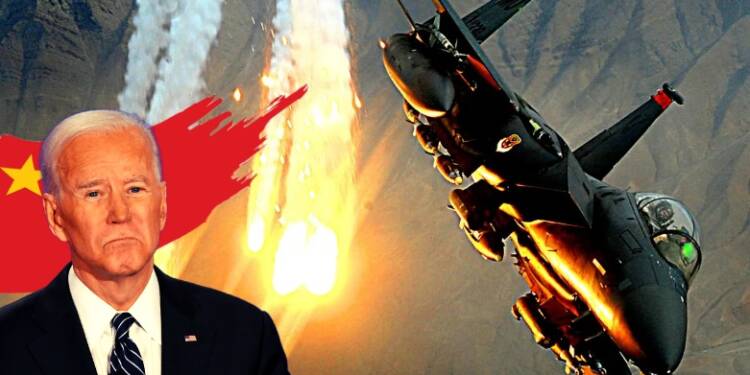 The Western news networks are going wild over the Russia-Ukraine war. They have conveniently forgotten Chinese human rights violations and aggression. US President Joe Biden is happy to act as a China dove and give Xi Jinping a free pass.

But the US Air Force will not let China go. The US Air Force has given a huge setback to Biden by making it clear that it will keep watching Xi Jinping like a “hawk”.

The top U.S. Air Force commander in the Pacific, Gen. Kenneth Wilsbach, has made it clear that he would keep watching China’s actions.

Gen. Kenneth said, “I’m watching [Chinese President Xi Jinping] like a hawk.” The top Pacific commander added, “I haven’t seen anything so far, but that doesn’t mean they haven’t talked about it internally and doesn’t mean that they won’t try something.”

The US Air Force has thus made it clear that it is not going to lower the guard on Taiwan front. And it is a warning of sorts to the Biden administration too. President Biden doesn’t have the luxury to go soft on China, while the Russia-Ukraine war captures all the attention.

Gen. Kenneth warns about China returning to the status quo

The US Pacific Air Force Commander also claimed that the Chinese scaled back their provocations against Taiwan during the Beijing Winter Olympics. However, they are returning to the status quo as expected.

On February 24, eight Chinese fighters and a reconnaissance aircraft flew through the Taiwanese air defence zone. Taiwan had to scramble its own fighter aircraft to warn off the Chinese aircraft.

However, it seems that the episode got overshadowed in the Western media amidst the 24×7 coverage of the Russia-Ukraine conflict. Anyhow, Gen. Kenneth is now raking up the China-Taiwan issue all over again. This spoils Joe Biden’s plans of mainstreaming China and isolating Russia.

How the US Air Force has spoiled Biden’s plans?

For Joe Biden, the Russia-Ukraine war was a major opportunity. It was allowing him to dilute the Indo-Pacific agenda and make Russia is the focal point of the world.

He even went as far as hijacking the China containment agenda of the Quad group and calling a meeting with Quad leaders “to discuss the war against Ukraine and its implications for the Indo-Pacific.” So, basically, the message being sent across was that Russia has to be the only agenda on US security policy and that China is no longer going to be treated as a threat.

In fact, as per NYT, American officials had even urged China to stop the war in Ukraine. They reportedly shared intelligence on the Russian troops’ build-up with Chinese officials and wanted the Chinese President to intervene.

Biden was thus humanizing the Chinese regime. It was being portrayed as acceptable for the world, while Putin was being demonised. But the US Air Force has spoiled all his plans.

The US Air Force Pacific Commander has made it clear China remains America’s enemy and that the US military will keep a watch on the Communist country. This effectively throws Biden’s plans of mainstreaming China out of the window.