Iran, US, Israel, Russia, and Ukraine: A drastic new development is taking place in West Asia 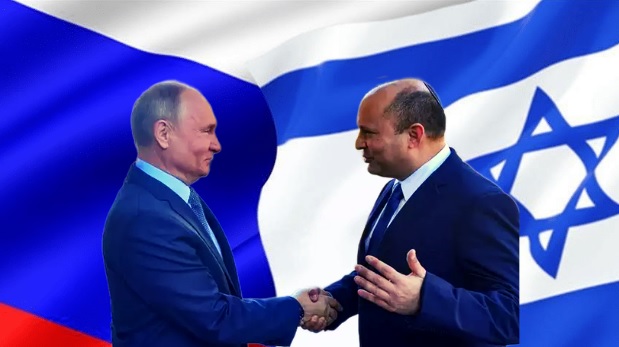 The United States of America and its allies have imposed sweeping sanctions on Russia. Moscow has launched an invasion of Ukraine. Israel is promising to destroy Iran’s nuclear ambitions. Iran, meanwhile, is staring at a revival of the Joint Comprehensive Plan of Action – also known as the 2015 Nuclear Deal brokered by Barack Obama. Wouldn’t you say a lot is happening around the world? Well, here’s something else you should know.

A complex and very interesting game is going on between the U.S., Israel, Russia, Iran and Ukraine. While Ukraine is more of a bystander and catalyst to the happenings, the other four countries are really in the thick of things.

Let me give you some context. The USA and its allies have slapped stringent sanctions on Russia. But you see, for Israel – its security interests are paramount. Therefore, to secure these interests, Israeli Prime Minister Naftali Bennet flew to Moscow secretly on Saturday and met Russian President Vladimir Putin for three long hours at the Kremlin.

While the world thought that Bennet was in Moscow to mediate between Ukraine and Russia and appeal to Putin for a ceasefire, he was there to talk about the Iran Nuclear Deal.

You see, the Iran Nuclear Deal’s revival is almost done. A mere formal announcement remains. But Bennet’s visit to Moscow has changed many equations, and the effects were immediate.

On Saturday, Russia linked a brewing effort to revive the 2015 Iran nuclear deal with ongoing international sanctions against the Kremlin over its invasion of Ukraine. Russian Foreign Minister Sergey Lavrov said the Russians want promises that the sanctions being imposed on Moscow for its invasion will not affect its trading relationship with the Iranian regime.

Essentially, Russia has just vetoed the revival of the Iran Nuclear Deal for the foreseeable future. Israel, therefore, is happy.

But what is Russia demanding now? Internally, it seems, Moscow has conditioned green-lighting the nuclear deal only if major sanctions imposed on its economy are removed. It seems to have conveyed the same to Israeli Prime Minister Naftali Bennet. You must remember, Israel is a staunch opponent of the Iran Nuclear Deal. It is annoyed at the Biden administration’s zeal to get the deal revived.

So, with Moscow potentially upending the deal’s revival, Israel wants to make sure Russia knows how its stance is appreciated by the Jewish nation.

Joe Biden will not remove the sanctions imposed on the Russian economy – at least not any time soon. Imagine imposing tough sanctions on Russia for invading Ukraine only for a week! It would be suicidal, especially with the midterm polls looming over Biden’s head.

Therefore, Russia has decided to undo all the gains made at the negotiating table with Iran. Mind you, Russia and Iran do share good ties with each other, and even have an alliance so to speak. Russia’s move of derailing the JCPOA’s revival will not, according to conventional public opinion, be taken well in Tehran.

But I beg to differ. Iran will produce nuclear weapons by hook or by crook. It simply does not matter whether Iran signs the JCPOA or not. It will, eventually, get its hands on dirty bombs. Russia knows this, and so does Israel.

Israel, meanwhile, has made it known to the world that it is willing to go to any extent to kill Tehran’s nuclear ambitions. It has been taking continuous steps to derail Iran’s nuclear programme. Assassinating nuclear scientists, attacking nuclear facilities, coordinating with the Trump administration to take Qasem Soleimani out – Israel has done it all.

Tel Aviv now seems interested to have a similar partnership with Russia. Moscow can prevent Iran from getting hold of nuclear weapons. Will Russia bite? Only time will tell.

One thing is clear though. Israel has shunned the Biden administration and is pursuing independent ties with Russia.