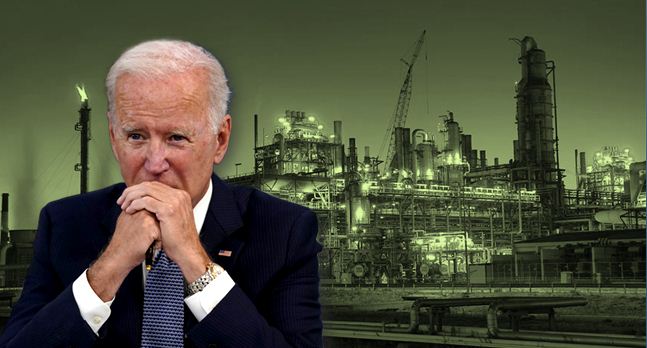 US President Joe Biden, since taking over the office, has been vocal on green energy resources. He manoeuvred moves to push US oil, energy, and power industries towards the sustainable and green path. But, in that process, he has taken several decisions that have now started yielding negative results on the US economy, and the implications are seen within the day-to-day life of the American people.

In his previous anti-fossil fuel policy decisions, Biden restricted US oil producers from increasing their production capacities and also extracting more oil from the US soil. Biden took decisions that raised the cost for energy companies to drill on public lands and waters. The Biden administration then went ahead in cancelling the Keystone XL oil pipeline project which could have helped the US by providing uninterrupted oil supplies in the current bitterness of the Ukraine – Russia conflict.

All these reasons when combined with the current oil supply shortages have pushed the US domestic oil prices soaring. Inflation is rapidly rising and is further pushing the food and commodity prices to tower newer heights.

Also Read: The immediate effect of the Russia-Ukraine pseudo war is here: US, Europe and China scramble for gas

Biden’s negative policies on oil production in the US

Last year, the Biden administration took several policy decisions that took the US oil and energy sector into a quagmire. The Biden administration pushed for reforms in the oil and gas leasing program that would raise costs for energy companies to drill on public lands and water. The US government thus pushed a recommendation to put an end to leasing on public lands.

To fulfill President Biden’s January 2021 order, a new report on the issue was completed and reviewed. Biden also directed a halt to new federal oil and gas lease sales on public lands and waters.

The US Interior Department recommended hiking federal royalty rates for oil and gas drilling. According to the department officials, the federal rate of 12.5% that developers must pay to drill on public lands is significantly lower than what the private landowners charge for drilling leases on state or private lands. A Biden-ordered report, on the issue, said that the government should consider raising bond payments that energy companies must set aside for future cleanup before they drill new wells.

The moratorium drew sharp criticism from congressional Republicans and the oil industry, even as many environmentalists and Democrats said Biden should make the leasing policy permanent.

It was Obama administration that first halted the Keystone XL pipeline project and now the Biden administration has followed suit by bringing the project to a standstill.

According to Tim Scott, a Senator from South Carolina, the United States imports nearly 600,000 barrels of oil a day from Russia—an amount that could have been more than 800,000 barrels of oil the Keystone XL pipeline is capable of delivering each day, only if the Biden administration hadn’t stood in the way. He said, “As Vladimir Putin conducts his evil and unprovoked attack on Ukraine, now more than ever, we must cut off our energy dependence on Russia while turning up our energy production here at home”.

In recent times, the Biden administration has received a lot of backlash for not doing enough to control the rising oil and gas prices. Biden’s failures have now started showing negative effects on the US economy and the life of the American people as they suffer power shortages, super high fuel prices, and rapidly rising inflation.

Biden has failed in convincing OPEC to increase oil production. He has even failed in persuading the major oil-producing countries like UAE and Saudi Arabia for more supplies in the international market. It seems that the American people will have to suffer for the misdeeds committed by Biden and as it goes the high inflation and living cost is sure to drill a deep hole in the citizen’s pockets.