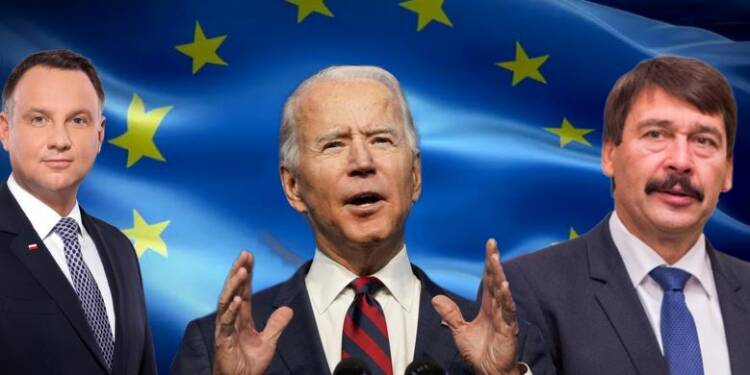 The EU Parliament adopted a resolution on Thursday, welcoming the European Court of Justice’s recent judgement that dismissed the actions of Poland and Hungary against the Rule of Law Conditionality Regulation.

The Resolution implores the European Commission to withhold funds from member States that do not respect the rule of law. Hungary and Poland have been categorically named as violators.

Poland and Hungary livid with threat of EU sanctions

When the European court dismissed Hungary-Poland rule-of-law challenge, both the countries had expressed disaffection towards the EU.

Polish Deputy Justice Minister Sebastian Kaleta had tweeted that there was a need for “unity against the attack on our sovereignty.”

Kaleta had said, “Poland must defend its democracy against blackmail aimed at taking away our right to self-determination.”

Hungarian Justice Minister Judit Varga too dismissed the European Court ruling as a “political judgment” and proof of abuse of power by the EU. Varga said, “The ruling is another application of pressure against our country because we passed our child protection law during the summer.”

Poland and Hungary have never been comfortable within the EU.

Both the countries have a conservative society, with anti-LGBT and anti-abortion laws that go against the larger EU agenda. During the refugee crisis too, the two countries were at odds with Western Europe and had refused to take their allocated share of refugees who fled the war in Iraq and Syria.

And then, you see anti-EU remarks coming from the governments of Poland and Hungary whenever Brussels criticises them.

As of March 9, Poland had already taken a little less than 1.5 million refugees. Hungary, on the other hand, accepted over 214,000 Ukrainian refugees.

The Ukraine crisis is merely a result of an ego clash between the Western world and Russia. Hungary and Poland are simply getting sandwiched in between. They won’t be able to finance the burden of incoming refugees for too long and will start asking for money from Brussels sooner or later. And this is when the EU could face a disintegration between Western powers like France and Germany, and Central European nations like Hugary and Poland.

Poland getting snubbed by the West

To make matters worse, Poland is being made to feel marginalized by the Western powers- the EU and the US.

Poland wants to help Ukraine in its ongoing crisis. Therefore, it had proposed to hand over its used, Soviet-era MiG 29 fighter aircraft to an American air base in Germany. Once in American control, the aircraft could get transferred to Ukraine. Warsaw also asked other NATO members with Soviet-era warplanes to follow suit.

The Polish Foreign Ministry said, “At the same time, Poland requests the United States to provide us with used aircraft with corresponding operational capabilities. Poland is ready to immediately establish the conditions of purchase of the planes.”

The deal sounded fair, but the Undersecretary of State for Political Affairs Victoria Nuland expressed “surprise” and said, “I was in a meeting where I ought to have heard about that just before I came (to a Senate hearing), so I think that actually was a surprise move by the Poles.”

The Pentagon too has stayed silent. So, the US has seemingly shot down Warsaw’s proposal. This is bound to further fuel anti-West sentiment in Poland.

Biden’s Ukraine policy is already creating a sharp divide between Western and Central European countries. To add to it, the EU wants to sanction Poland and Hungary. With this, the beginning of the end of the EU may have already started and its disintegration could start from Poland and Hungary.

“No compromise with our security”, Philippines’ message to Joe Biden is loud and clear