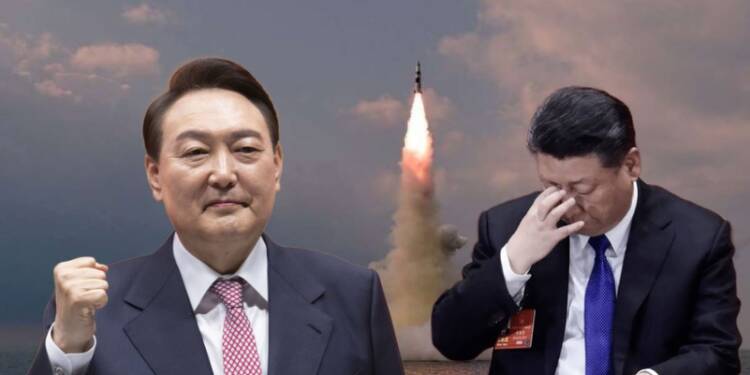 South Korea has elected a China hawk, Yoon Suk-yeol, as its new President. The thing about Yoon is that he wants to secure South Korea at any cost, unlike Moon Jae-in who prioritized economic growth over security.

Read more: One move by the Korean opposition has dashed the re-election ambitions of the ruling liberals

And how can Yoon protect South Korea? He is sandwiched between North Korea and China, both of whom have way too many nuclear warheads staring down at South Korea. So, Seoul needs to go nuclear. South Koreans want it and frankly, conservative leaders too want nuclear cover. There is every possibility of South Korea pursuing a nuclear weapons policy.

The hunger for nuclear weapons is growing in SouthKorea as they see the China threat getting bigger. 55 percent of the respondents agreed that “China will be the biggest threat to South Korea in ten years.” This is what also explains overwhelming support for a nuclear weapons programme amongst South Koreans.

Does South Korea have a bomb in the basement?

Recently, a report released by thebulletin.org revealed that South Korea has been covertly seeking to develop the “pyroprocessing” technology to separate plutonium from spent fuel.

And why is this important? Well, it is the same technology that India had used in 1974 to carry out its first nuclear test. So, we do know that South Korea does have the technology to develop the nuclear bomb.

Given South Korea’s civilian nuclear programme and secret nuclear experiments in the past, it is widely believed by military experts that Seoul might be able to develop nuclear weapons within 18 months. So, the answer is yes. South Korea does have a bomb in the basement.

Unlike Moon, Yoon does want South Korea to attain nuclear deterrence. Most conservative politicians in South Korea back nuclear firepower as opposed to the liberal faction’s resistance on the issue.

In fact, Yoon wants nuclear to account for 30% of total energy generated in his country. Moon, on the other hand, was trying to wrap up South Korea’s nuclear energy programme over safety concerns following Japan’s Fukushima disaster in 2011.

Yoon may have to develop domestic nuclear weapons

The US is not keen on stationing its nuclear weapons in South Korea, at least not as long as Biden is in power.

In 2016, South Korean deputy national security adviser Cho Tae-yong had visited the US with a secret request to deploy nuclear weapons in South Korea. However, Cho’s request was turned down. Then US President Barack Obama abandoned South Korea and said that he wanted a world without nuclear weapons.

Now, the Yoon administration is likely to make a similar demand again after taking charge of affairs in Seoul. But the man in the Oval Office, Joe Biden, is a former deputy of Barack Obama himself. It is almost certain that Biden too would turn down South Korea’s request for deployment of nuclear weapons.

And what can conservatives do when the US rejects their plea for re-deployment of tactical nuclear weapons? Well, in 1974, South Korea’s then-president Park Chung-hee feared that the US might abandon his country. So, he initiated a covert nuclear weapons development program. However, Park was later forced to roll back the nuclear program under American pressure.

More recently in October 2017, then chair of the Korean conservative party Hong Jun-pyo said that if the US didn’t return tactical nuclear weapons to South Korea, Seoul would have no choice except going nuclear.