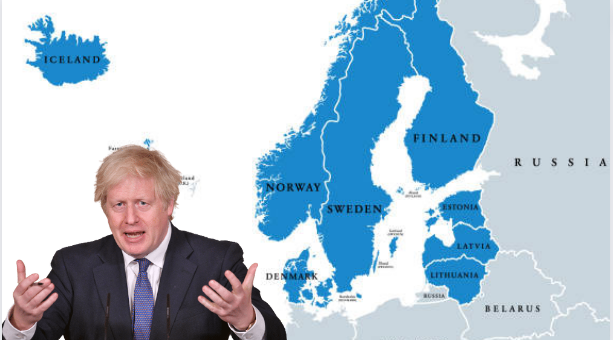 It has become clear after the Ukraine war that NATO and the EU are not going to come and save you when you are getting assaulted. Ukraine got invaded, and NATO and the EU didn’t do anything about it. Now, it is being feared that the three Baltic States- Latvia, Lithuania and Estonia could become the next causality of Russia’s expansionist ambitions.

Most of the Nordic-Baltic countries are EU and NATO members. But does it matter? Well, it doesn’t seem so. Therefore, the UK thought why not create a bloc of its own and divide the EU.

The UK to bring together 9 European nations

British Prime Minister Boris Johnson will host the leaders of the eight Nordic-Baltic countries—Finland, Iceland, Denmark, Sweden, Norway, Lithuania, Latvia and Estonia, along with the Netherlands—for talks in London on Tuesday.

The agenda of the meeting is fairly predictable. The nations will discuss the Ukraine crisis and try to find ways to isolate the Russian economy.

The UK Prime Minister is trying to weaponize European security concerns. He knows that the NATO and the EU apparatus has failed to inspire confidence. These small nations have realized that they can’t be over-relied on NATO’s security guarantees. This is why the UK gets some vacuum to fill.

Johnson said, “European security has been shaken by the attack of Russia on Ukraine, and alongside our partners, we will take action to ensure we emerge stronger and more united than before.”

The meeting of several world leaders in London is expected to focus on holding more military training exercises in the North Atlantic and Baltic Sea, apart from discussing the Ukraine war and energy security.

For the three Baltic countries, concerns regarding Russia’s hostilities are hardly limited to a huge mismatch in military firepower.

The fact remains that these three countries are almost totally dependent on Russian energy imports. And this puts them in a rather awkward position.

Johnson said, “Ensuring we are resilient to Putin’s threats needs to go beyond our military footing – together alongside our North and Baltic Sea partners we must ensure we are insulated from Russia’s interference and impact on our energy supplies, economy and values.”

UK trying to create its own bloc

Presently, the Western world is broadly divided into two blocs- the US bloc and the EU bloc. NATO is more or less seen as a US-led bloc. The EU, on the other hand, is an economic bloc in itself.

But what is the status of the UK after Brexit? It risks becoming a part of a US-led Western bloc. This would mean that London becomes the fifth wheel of Washington’s foreign policy, instead of becoming a leader in itself.

Read more: Biden pays UK’s loyalty off with betrayal in the Middle East

So, Johnson is now trying to capitalize on some serious fault-lines that have emerged within the EU. In this sense, the EU and the UK have become rivals instead of becoming allies. In fact, Johnson is targeting the most vulnerable of EU members in a bid to pull them onto London’s side.

Read more: In a royal snub to European Union, India takes the first step towards a free trade deal with UK

This is an all-out attack from a former EU member on EU’s integrity. The stated objective is to counter Russia, but London’s actual motive is to divide the EU and make big geopolitical gains out of the division.