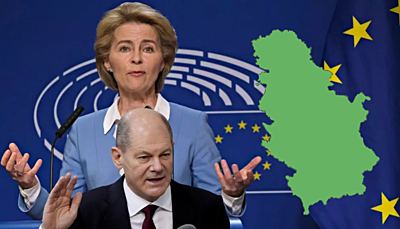 433
VIEWS
Share on FacebookShare on Twitter
In Serbia, the European Union risks losing out to Russia and China due to its hallmark delaying decisions allowing these nations to take advantage of the situation and raising tensions in the continent’s most dangerous region.

Days after the Chinese missile system was delivered to the Balkan country, Germany objected to Serbia’s assertion that if it wants to join the EU, it must adhere to EU foreign and security policy.

In an official email statement, Germany stated, “The German government expects all EU accession applicants to join the European Union’s Common Foreign and Security Policy and so to move increasingly closer to the EU.”

The European Union gave Serbia candidature status on, 1st March 2012, nearly a decade ago. Serbia, on the other hand, became a barrel of powder keg for the bloc as the membership process was delayed.

In 2012, Serbia was granted full candidate status for admission to the European Union. But, the EU lost its interest in Serbia over time. Prompted nations such as France and the Netherlands took a more gradual path to grant membership to Western Balkans aspirants.

The countries in the Western Balkans were regarded as insecure and regularly questioned if they share European values. Europeans, on the other hand, have never welcomed the Balkans. Just about a third of European citizens believe that more EU expansion is in their best interests.

As a result, Serbia started looking to other nations for alignment, and the interest to join the EU just dropped. Expectedly, public support for EU membership also waned, with only half of Serbs voting in favor of membership.

Serbian President Vučić took advantage of declining popular sentiment to strengthen Serbia’s trade connections with Russia and China. With a secondary goal of annihilating Kosovo following its independence in 2008.

Simultaneously, 40% of the population already believes that China is their country’s largest aid source. Whereas, Russia is the best available option for them.

Read More: A full-blown Serbia-Kosovo War is well on its way

Vucic looks towards China and Russia for Serbia

As a result of EU inaction, Vucic has been seeking to reduce Serbia’s reliance on Russia and strengthen ties with China. China has steadily surpassed Russia as Serbia’s best friend.

In 2020 when the COVID-19 outbreak began. Serbian President Aleksandar Vucic kissed the Chinese flag in gratitude for Beijing’s medical assistance.

In recent times, Serbia is also feeling the heat due to its links with Russia as the Ukraine conflict continues.

To cool down the rising pressure, Serbia voted in favor of a resolution condemning Russia’s invasion of Ukraine and supporting Ukrainian territorial integrity at the United Nations General Assembly. But, Serbia avoided imposing economic sanctions on Russia because the two countries share principles.

But Vucic cannot simply replace Russia as Putin has mass public support in Serbia. Serbians aspire to be like Putin. They are inspired by Putin’s image as a strongman. His defiance of the West is the cherry on top of the cake for them. He’s on the side of the road, on mugs, and t-shirts in Serbia.

On the other hand, Serbians are anti-China and have spoken out against Chinese investments on several occasions. Recently, Vucic only won elections again because he restored ties with Russia by adopting a pro-Russian position.

Read More: Putin’s war in Ukraine will remove every speck of Chinese influence from Serbia

It is necessary to state, that the EU’s credibility has suffered, especially since France and the Netherlands temporarily halted the enlargement process two years ago. With investments and influence, China and Russia are advancing in the region.

Yes, Russia has the potential to prevent Chinese investment in Serbia, but that is another matter. In their war against the west, Serbia is today linked to both the states. As a result, European countries are under the pump.

As a result of this proclamation by Germany, the EU may face Serbian’s heat and if nothing is done, the EU will be sitting on a barrel of powdered keg namely Serbia.