A full blown Serbia-Kosovo War is well on its way 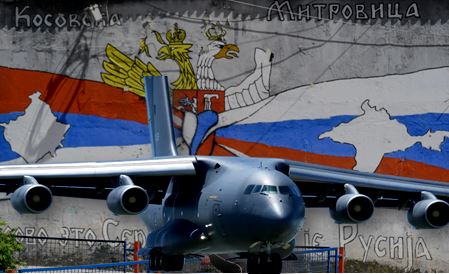 It’s not very often that you get to spot Chinese military aircraft land on European soil. But on the last weekend, six Chinese Air Force Y-20 transport landed at the Belgrade civilian airport in Serbia and delivered HQ-22 surface-to-air missile systems for the Serbian military.

And the development was enough to trigger panic in the Western world. So, what is happening? Is Serbia planning an invasion of Kosovo? And whether the Balkans is headed for a fresh war following Putin’s invasion of Ukraine? So, why do we think that a full-blown Serbia-Kosovo war could be on its way?

Well, we need to understand the history of the region and how the Ukraine war affects it.

The history of Serbia and Kosovo

The history of conflict between Serbia and Kosovo dates back to the Yugoslavia wars of the 1990s. The erstwhile Federation of Yugoslavia was unraveling at the time with countries like Slovenia and Bosnia waging wars to secede themselves from Yugoslavia.

Kosovo was a province of Serbia and Serbia itself used to be a part of Yugoslavia. Once the hub of Serbian culture, Kosovo had gradually changed into an Albanian Muslim-majority region that led to ethnic friction between the Albanians and the Serb minority.

In 1989, Slobodan Milošević became Serbia’s President. Given his nationalist ideology, Milošević stripped Kosovo of its autonomy and tried to invoke the province’s Serbian culture. However, the Albanians protested and by 1995, an armed struggle started shaping up.

The Kosovo Liberation Army (KLA) emerged in the mid-1990s. It began conducting coordinated attacks in 1996 and targeted Serbian police stations.

Soon, the KLA started demanding Kosovo’s separation from Serbia and the next thing you know, the KLA was involved in an armed insurrection with forces from Serbia and Yugoslavia. The US seemed to put its weight behind the KLA and thus,  NATO made an unsuccessful attempt to mediate a truce between the KLA and the Serbian government in 1999.

Read more: Trump wants a solution to Serbia-Kosovo issue to keep China at bay, but EU may be sabotaging his efforts

Ultimately, NATO began a bombing campaign against Serbian military targets in March 1999 that lasted 11 weeks. This was followed by the deployment of a UN peacekeeping force in Kosovo and the withdrawal of all Serbian and Yugoslav forces. The KLA got disbanded and many of its leaders became active in Kosovo’s administration.

What is Kosovo’s present status?

Yugoslavia got dissolved in 2003. A Federation of Serbia and Montenegro was founded but that too collapsed in 2006. Meanwhile, the tensions between Albanians and Serbs in Kosovo soared which invariably led to anti-Serb riots in 2004.

Ultimately, in 2008, Kosovo declared its independence from Serbia. The US and other Western powers supported it. However, Serbia, Russia, and China remain unclogged and are yet to recognize Kosovo as a separate nation.

Read more: Sworn enemies Kosovo and Serbia have almost patched up. Thanks to Trump

Why the Ukraine crisis endangers Kosovo?

Serbia insists on keeping Kosovo as an integral part of its territory. The country has been arming itself with Russian and Chinese military aircraft, battle tanks, and other military equipment. In 2020, it even purchased Chengdu Pterodactyl-1 drones that are capable of conducting combat and reconnaissance operations.

The US has been trying to discourage Belgrade from acquiring Russian and Chinese military platforms. Back in 2020, US officials even warned Serbia against buying HQ-22 missiles and said that the country must align its military equipment with Western standards if it wanted to join the EU and other Western alliances.

Kosovo itself realizes that it sits in a vulnerable position. It established a ‘Security Fund’ to invite citizens to fund the development of a nascent Kosovo army. However, the initiative isn’t believed to have contributed significantly to Kosovo’s military strength. The government also formed a working group to bid aggressively for Kosovo’s NATO membership. But it isn’t likely to be successful because five EU member States- Spain, Greece, Slovakia, Romania, and Cyprus, do not recognize Kosovo as an independent country.

Meanwhile, Serbia is purchasing new weapons and is arming itself to the teeth. A full-blown Serbia-Kosovo war could therefore be well on its way and it could mean yet another major humiliation for the US and NATO.

Elon musk could engineer a hostile takeover of Twitter