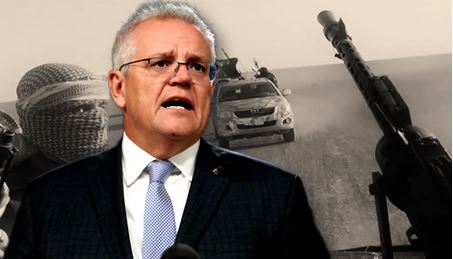 UN urges Australia to take back its citizens from Syrian camps

In a move aimed at pressurizing the Scott Morrison government, 12 UN special rapporteurs wrote a letter to the Australian government raising concerns about Australian individuals held in the al-Hawl and Roj camps.

The letter claimed that “most of these individuals are held and are deprived of their liberty without any judicial process” in these camps. It further stated that the conditions “constitute a violation of a number of human rights, and meet the standard of torture or other cruel inhuman or degrading treatment or punishment”.

The UN special rapporteurs also demanded that the Australian government should repatriate its citizens. The letter called it “the only legal and humane response to the complex and precarious human rights, humanitarian and security situation”.

Read more: Jacinda loves IS terrorists, so Morrison sends her planeloads of them

Why are Australian individuals held in Syrian camps?

You may be wondering why Australian individuals are held in Syrian camps administered by the Kurdish authorities. After all, the Middle East nation is far away from Australia.

Well, remember the days when ISIS was spreading its wings in Iraq and Syria? The Islamic State had then recruited radicals from all across the world and Australia was no exception.

So, many Australians too decided to move to Syria and join the fighting on the Islamic State’s behalf. Today, those detained in Syrian camps are believed to be family members of Islamic State fighters who had travelled to Syria and Iraq to fight for ISIS.

The Australian security agencies and government remain skeptical about bringing back all those held at the Syrian camps without any prior verification. However, the UN has been pushing the Scott Morrison government to simply bring back everyone.

The UN letter to the Australian government that was written in February but released only in April claimed, “It is our considered view that any argument based on the extreme nature of the situation cannot be used to justify such already lengthy detentions and the complete lack of steps taken by your Excellency’s government to remedy the sheer obliteration of the rights of Australian citizens resulting from their arbitrary deprivation of liberty.”

It added, “The absolute prohibition of arbitrary detention in international law is considered so fundamental that it remains applicable even in the most exceptional situations.”

Australia has consistently maintained that it is concerned about the situation in Syrian camps, but it has also made it clear that it will consider repatriations only on a case-by-case basis and is focused on protecting “the Australian community”.

Australia’s ambassador to the UN in Geneva, Amanda Gorely echoed a similar sentiment. Gorely also said that Australia “does not accept that it exercises jurisdiction over detention facilities in North-East Syria such as to engage the extraterritorial application of Australia’s international human rights obligations”.

Marise Payne, the Foreign Affairs Minister, was even more direct in her remarks on Saturday. Payne said that the government “did everything we could to dissuade and prevent Australians from travelling to that zone in the first place”.

She added, “And unfortunately a number still chose to do that, both women and men, and there are of course … a number of children who are with largely their mothers at this stage, still in that zone”

Payne also said, “What we have to take into account is the safety of all Australians, including here domestically, and these are matters that we continue to discuss within the government.”

What Payne has said is in line with Australian PM Scott Morrison’s view on the issue. Last year, Morrison government stripped Suhayra Aden, who had left for Syria in 2014 to join ISIS, of her citizenship. Morrison had then declared that “terrorists who fought with terrorism organizations forfeited their right to citizenship.”

This time around, Payne too said that she would “not go into the specifics of any intelligence of course, but ultimately, they are Australians who have found themselves in this position because their parents took themselves to those war zones”.

Australia is therefore quite clear about not compromising its own national security, no matter how much the UN bullies it. The UN may be favoring radicalism, but Morrison isn’t going to normalize it in his country.