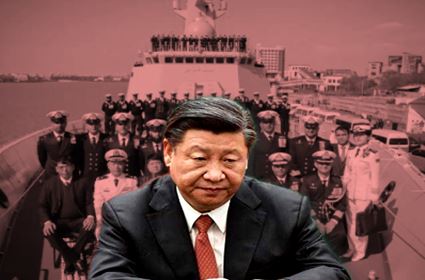 China’s green-water navy is undergoing drastic modernization. By 2030, the PLA Navy aspires to control the global seas. This is clearly reflected in PLA’s appetite for aircraft carriers. The Chinese navy currently has two operational carriers, and it is building the third one.

Some experts suggest that China has set its eyes on at least 10 such carriers by 2049 to achieve its global naval domination. But much to the CCP’s chagrin, the PLA Navy’s inflated ambitions have now hit a roadblock. Covid-19 is ravaging the country in an unprecedented manner, and this is believed to have killed China’s plans to build its third aircraft carrier.

The third aircraft carrier was anticipated to be launched on April 23 of this year. The Type 003 aircraft carrier has been under construction at the Jiangnan Shipyard on Shanghai’s Changxing Island since 2017. State-owned China State Shipbuilding Corporation (CSSC), which was entrusted with the task of building the ship, has failed to fulfill its commitment.

Eurasian Times has reported that CSSC couldn’t build the third aircraft carrier because several of its resources were deployed to help the government’s efforts against Covid-19. The Chinese government was faced with two difficult choices—either get the aircraft carrier built as per the scheduled timeline or curb the uncontrolled spread of the deadly plague.

Hence, instead of China’s third aircraft carrier, the China State Shipbuilding Corporation was busy constructing hospitals for Covid patients. CSSC built three temporary hospitals on Changxing Island with more than 4,400 beds in less than a week. The company’s involvement in CCP’s Covid relief efforts thus rendered CSSC understaffed and overburdened, which resulted in the aircraft carrier project getting delayed and derailed.

Moreover, the pandemic has also throttled supplies of important elements that are required in building the ship. One source was quoted by the South China Morning Post as saying that “the plan faces delay as the rampant pandemic in Shanghai has delayed the transport of some key components.” And not just the third aircraft carrier, the PLA Navy’s plan to build two supply ships is also set to face hurdles.

But the problems being faced by China in building its third aircraft carrier are just the tip of the iceberg. The second aircraft carrier, which has already been built by the Chinese shipbuilder, is also facing some serious problems. The ship has still not reached the combat-readiness stage and officials seem to have no explanation for that.

You see, the pandemic has caught China off guard. It was so underprepared that it had to rely on its shipbuilder companies to build hospitals for Covid patients. China’s financial hub, Shanghai, has already succumbed to the fourth and the most powerful wave of the pandemic, and now its navy is looking at an excruciating death of its global ambitions in the eye. All in all, China’s economy, as well as military might, is plummeting at a pace like never seen before. A virus, that China unleashed on the world, has now come back to haunt its own homeland. The irony is striking.