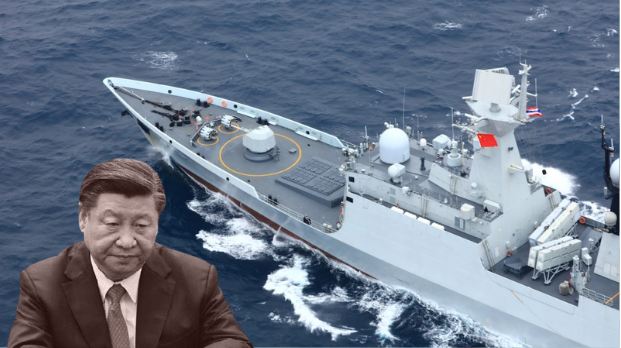 Which adversary will you choose- one who carries a lot of pomp and show, or the one who is underrated but can inflict a lot of damage when matters escalate? Of course, you will choose the one with all the showbiz but little glory. This is particularly true of the Chinese People’s Liberation Army Navy, also called the PLA Navy and its fishing militias.

PLA Navy is the largest in the world, with around 350 ships and submarines. Yet, no one fears it and despite being accorded special “shooting powers” earlier this year, the Chinese warships and coastguard vessels seem quite harmless. In fact, they get routinely chased away by smaller navies like Japan, Taiwan, Vietnam and India. Similarly, France, the US, the UK and Australia too don’t feel intimidated while entering China’s backyard and carrying out freedom of navigation exercises.

Take the case of Taiwan. It is a tiny nation separated from China by a narrow Strait. Yet, Taiwan doesn’t really get bothered by Chinese warships. On Saturday, the Taiwanese Coast Guard Administration’s (CGA) Eastern branch claimed that it had chased away two large Chinese fishing boats near Taiwan’s Orchid Island.

On June 28, a CGA patrol boat had seized a Chinese fishing vessel, following its failure to stop for inspection.

For example, China is building its third aircraft carrier called type 003, expected to be launched this year. It is billed to be the largest ship in the Chinese Navy fleet. We don’t doubt that China will be able to build it in time, but the catch is China doesn’t have any fighter jets to equip its gigantic 003 carrier with. So, the Chinese Navy will be practically operating a gun without any bullets.

So, don’t be surprised when you read that Vietnam chased away vessels with Chinese flags, or that Vietnam has created a huge fleet of fishing boat militia, which can dominate the Chinese vessels. Similarly, Japan frequently chases away Chinese vessels that infiltrate into the Japanese waters near the Senkaku Islands.

In the Indian Ocean Region (IOR) too, the Indian Navy tracked a Chinese “research vessel” last year. In December 2019, a Chinese naval ship was forced to retreat from India’s Exclusive Economic Zone (EEZ) in the Andaman Sea.

The PLA Navy is simply incompetent to confront its rivals. China keeps making boastful remarks warning other powers against entering the South China Sea. But when the UK’s flagship aircraft carrier HMS Queen Elizabeth entered the South China Sea despite prior warnings by Beijing, the PLA Navy literally couldn’t do anything. It exposed the cowardice and incompetence of the Chinese Navy.

In fact, Germany, India, Japan, Australia, UK and the US are set to conduct a massive military exercise in the South China Sea in a show of strength against Beijing. In fact, the Indian Navy too will deploy four warships in the South China Sea for 2 months. And quite clearly, China won’t be able to do anything about it, though a few Chinese State-run media houses might write a few bellicose reports about the massive military exercise.

Presently, Beijing has asked Berlin to clarify its warship’s intentions in the South China Sea. Now, if China is really a ferocious naval force, it wouldn’t be begging its rivals to issue clarifications, nor would Beijing’s rivals dare to enter the South China Sea. The fact remains that the incompetence of the Chinese Navy is well-known to its rivals, and they are able to show their strength against China quite fearlessly.

The oversized Chinese Navy is thus becoming the largest joke in the world, instead of becoming a fearsome military power. It is beautiful, spacious and airy, and completely harmless.