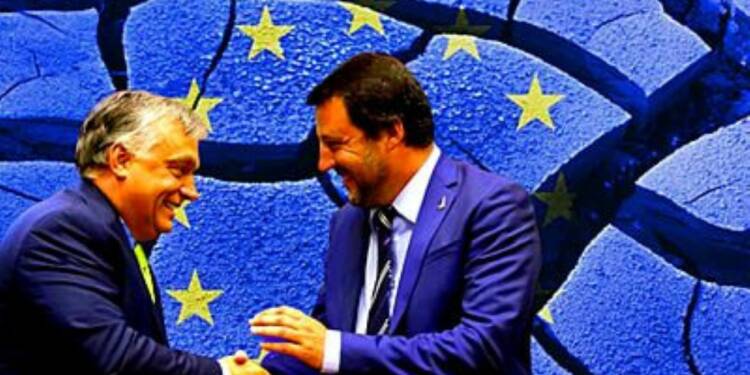 The politics of Europe and the EU are becoming increasingly interesting as right-wing or far-right politicians have proposed the formation of a new European Union. This new EU will be built on the backs of voices that these politicians claim have been crushed by other European Union members.

Salvini emphasised his “complete agreement” with Orbán on matters such as “against illegal immigration, the need to reduce the tax burden on families and businesses,” as well as the need to cooperate “on a European centre-right alternative to the socialists, to defend the values and roots of the West.”

What’s more startling is that Salvini mentioned a new EU “centre-right” for the first time. Silvio Berlusconi’s Forza Italia represents the center-right in Italy. Salvini’s Lega is perceived as far-right or right-wing at the same time, despite sharing this area with Georgia Meloni’s Fratelli d’Italia.

Perhaps the Italian leader is ready to construct a platform that, although inadequately, expresses his worldview. He might regard this as a first stride in achieving his aim of having a conservative platform similar to the EU, which has been chastised for its much-touted liberal migrant policy.

Although the meeting between the two leaders is significant, it is worth noting that the desire for a new EU or alliance to counter it is not new. The initiative began in the year 2021. In July, far-right parties from 16 EU nations signed a declaration referring to “right-wing parties” joining forces to reform the EU, including France’s Rassemblement National, Poland’s PiS, Hungary’s Fidesz, and Italy’s Lega.

Even if many observers regard all such movements as one homogeneous “populist right”, there are ideological barriers to such a partnership. These parties place differing emphasis on political and religious traditionalism, and they disagree on foreign policies. But, they do emphasize their collective voices when it comes to ‘decision-making’ in the parliament of the EU.

Read More: BREXIT: Rise of the Right Wing and the future of Europe

There have been numerous incidences that highlight the fact that the EU has problems with “far-right ideology”. Let’s take the case of Viktor Orban, for example. In the middle of the Russia-Ukraine conflict, Viktor, a devout nationalist, has chosen a pro-Russian attitude. And, as indicated by his spectacular victory, the Hungarians appear to have accepted his viewpoint. However, Hungary was soon chastised for acting in its own national interests. The European Union has imposed sanctions on Hungary. Yes, you read that correctly: the EU betrayed one of its own allies.

Moreover, Hungary has been subjected to rule-of-law disciplinary proceedings by the European Commission. The unproven mechanism, which was agreed upon by all 27 EU leaders in late 2020 and could eventually deprive Budapest of more than €40 billion in EU payments, was supposed to prevent EU money from being exploited by countries backsliding on the rule of law.

Marine Le Pen, France’s presidential candidate, faced a similar ploy. The EU accused her of electoral fraud. Mediapart, a French investigative news site, made the findings public two days before Le Pen faces President Emmanuel Macron in a runoff election that could determine Europe’s future trajectory. What was the real motive for this political vendetta? Well, only because Le Pen’s party seeks to undermine the EU’s legitimacy.

Read More: The liberal world order begins a witch-hunt of Marine Le Pen because she is set to win France

This alliance’s potential should not be underestimated. Adding the existing Right members of the European Parliament from the ECR and ID groups, as well as Orbán’s Fidesz, would total 149 MEPs, enough to overtake the Progressive Alliance of Socialists and Democrats (S&D) as the second-largest force in Brussels.

As a result of the EU’s negligence, a new alliance is coalescing to reimagine Europe and keep socialism and liberal politics out of Europe. This might change the political outlook of Europe forever.

Europe is secretly importing oil from Russia in ‘ghost ships’