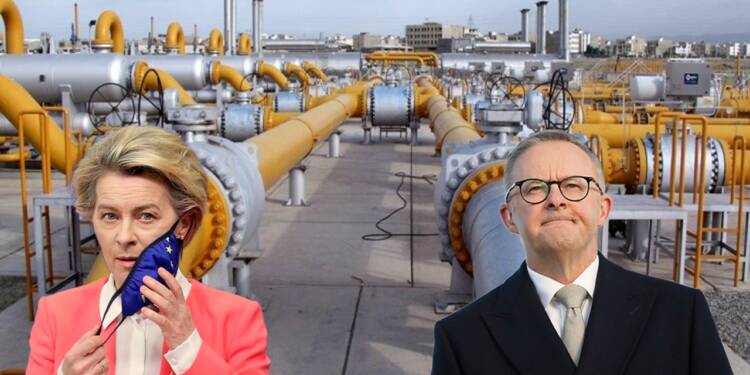 The Russian war in Ukraine has sent tremors through energy markets, raising fears that natural gas could be cut off from other European countries, causing significant economic damage. Europe is trying its level best to secure its gas supplies and increase its reliance on energy supplies.

As the Russia-Ukraine conflict approaches its 100th day, Europe continues to the panic purchase of gas and oil, but this also comes at a cost.

Since the fuel supplies worldwide are now limited, any alternative to Europe will come at the expense of other nations. The EU recognizes that building a new pipeline will be costly to the war-torn continent, so it has chosen to arrange for FSRU transportation for LNG shipments.

Panic buying of Europe has caused Australia to struggle for gas.

To replace the pipelined gas from Russia, which has been halted by sanctions during the Ukraine conflict, France, Germany, and the Netherlands, are in need to import liquefied natural gas (LNG). Europe’s race to replace Russian gas supplies has put Australia’s plans for five gas import terminals in doubt.

Furthermore, this is increasing the possibility of a supply shortfall in Australia’s populous southeast in the next two years. Europeans are snatching up the floating storage and regasification units (FSRUs) required to convert LNG to gas, leaving relatively little for Australian import programs targeted to recover from the supply shortfall predicted by 2024.

International investment firm Credit Suisse’s analyst Saul Kavonic has explained the problem to Reuters. As per him, “Europe is snapping up all the spare LNG volumes out there and any spare floating LNG regas capacity. So there’s no spare regas capacity left over for Australia,”

Viva Energy, an Australian energy company that was hoping to get the go-ahead for an LNG import facility in Geelong, near Melbourne, this year, has lost its tentative booking for an FSRU to a German consumer. The buyer’s name is not known, but surely, this is not the only instance.

All five of Australia’s proposed LNG import terminal owners – Viva, Squadron Energy, Venice Energy, Vopak, and EPIK – are in trouble, with the possibility of having to suspend their plans due to Europe’s priority. Only one has started construction: Squadron’s Port Kembla Energy Terminal, which will be ready for first gas by the end of 2023 with a Hoegh Galleon FSRU chartered for the project.

But, this is not enough to solve Australia’s problem.

Read More: EU and China have successfully gas-trapped Japan, and now only Australia can save it

Australia is undoubtedly the world’s leading LNG exporter, but its main gas fields are located far from Sydney and Melbourne, as well as other major cities in the southeast. In addition, most of the output is contracted with Asian customers.

As a result, the former Scott Morrison government decided to move forward with LNG import projects, and regasification infrastructures as Australia’s competition regulator had warned that without supply fixtures, the southeast market would face a shortfall from the winter of 2024.

If the problem is not solved by 2026 or 2027, a shortfall over the whole east coast of Australia is expected. So, the stakes for Australia are quite high. Furthermore, instead of buying an existing vessel, looking for a new-build FSRU would result in further delays.

We must say that Europe’s ambition has sparked a new crisis in Australia. What happened in Europe will almost certainly cause LNG projects by Canberra to be delayed.

Fuel has become critical for economies as a result of recent geopolitical events, and Europe’s Panic Buying to maintain its energy supply would not only raise prices but also exacerbate the post-pandemic economic recovery.

This isn’t just happening in Australia; it might be happening in other countries as well. It’ll only be a matter of time before they’re exposed.