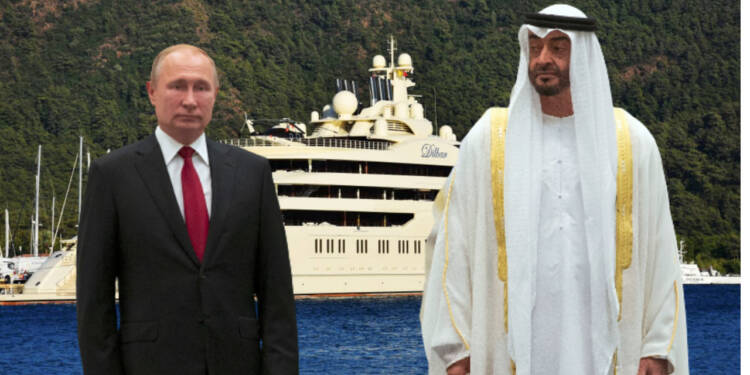 Some of the most expensive yachts owned by Russian oligarchs have been attached and impounded by the European powers and the US ever since the Ukraine war started. And yachts are just the tip of the iceberg. The fact remains that no Western country is ready to welcome a Russian oligarch today.

However, the UAE is open to Russian oligarchs. They can park their yachts, their money, and all their assets in UAE and get away with it. Yes, the UAE has been an ally of the US for several years now. However, it has also come close to Putin and is unwilling to join sanctions.

The UAE’s inclination towards Russia is illustrated by the $300mn Philippe Starck-designed Motor Yacht A. The expensive yacht belongs to Andrey Melnichenko, a Russian oligarch alleged to have close ties with Putin. For several weeks, the yacht has been anchored in the port of Ras Al Khaimah, in the United Arab Emirates.

The UAE has maintained that there should be a de-escalation in the ongoing Ukraine war. It has also supported humanitarian assistance to Ukraine.

Moreover, the UAE did promise that sanctioned Russians won’t be allowed to do business in the country. However, the UAE also maintains that it is not compelled to abide by the sanctions of other countries.

Amidst such ambiguous UAE stance, thousands of non-sanctioned Russian businessmen have entered the UAE to escape economic uncertainty. They do face some issues in operating in the UAE but are able to manage it ultimately.

FT quoted a Russian businessman as saying, “Big banks are more cautious, but smaller banks are offering help to those wishing to relocate. It’s just taking a lot of time.”

In order to overcome any issues in dealing with the financial institutions, Russian businessmen are able to find alternative routes like cryptocurrencies, hawala, or informal money exchange services.

On its part, the UAE seems to have gone so close to Putin that it is ready to run any risk for Moscow.

Remember, the UAE has been grey-listed by the Paris-based Financial Action Task Force (FATF). The West definitely has a chance of saying- get rid of Russian money and you will be taken off the grey list.

A compliance professional told FT, “Given its non-enforcement of western sanctions, the dilemma for the UAE is how to sustain its place as an open destination for capital while also appearing to be a good global citizen.” The professional added, “It’s a tricky balancing act.”

At the end of the day, the Emiratis understand that the Western world hasn’t really succeeded in mobilising the global opinion against Russia. Countries like India and China too have refused to sever business ties with Moscow. So, it doesn’t make much sense for the UAE to annoy Putin by toeing the Western line.

Moreover, Russia has good presence in the Middle East and a strategic relationship with Abu Dhabi. Therefore, the UAE wants to co-operate with Russia instead of doing the Western world’s bidding. And this is what makes the UAE a dream destination for the Russian oligarchs.