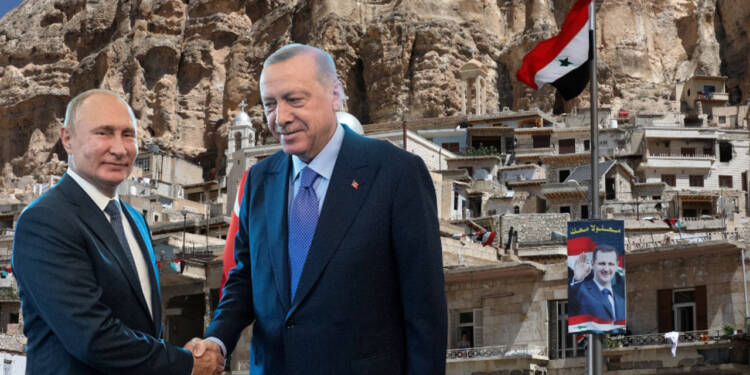 One week before Turkey tried to grab international attention with a statement that screamed conflict. The statement invigorated tension among Ankara’s neighbouring peers and more so with Russia. Turkey proclaimed out loud about a possible military action in the northern Syrian region which is considered as the last held bastion for Ankara on the Syrian soil. Just one week into the claim, Turkey has backed away from the move with the military confirming about taking aside all such plans of incursions.


Never minding the lethal geopolitical war ongoing in the eastern Europe, time was running out as Erdogan tried a détente with Russia over the Syrian crisis with a phone call to discuss Turkey’s planned military operation in northern Syria. Erdogan has said Turkey will launch a cross-border incursion against Kurdish militants in Syria to create a 30-kilometer (19-mile) deep buffer zone.

It all happened with the abrupt withdrawal of the US sanctions in northern Syria that triggered a Turkish response fearing the fact that the Kurdish-led SPG forces could muster more power in the region touted as ‘safe zone’ by Ankara. Safe zones are “areas designated by agreement of parties to an armed conflict in which military forces will not deploy or carry out attacks”.

But the sudden lifting of Caesar sanctions took Ankara by surprise. They were not adequately prepared for a response. If the US renders more military help to the rebellious Kurdish forces in the northern Syrian region, then it is little wonder that Turkey may lose hold of its last bastion in the Syrian plains.

This paused Erdogan to carve out a plan to hold on to their last forte, but the old man tried a charm by announcing a military operation into the northern Syrian region. For all its wrong reasons, the statement raised eyebrows within the power circles in both Kremlin and Tehran.

With the latest report coming out, Putin has rejected Erdogan’s request to invade the Kobani and Jazirah region in northern Syria. Turkey can’t put more pressure on Russia after the mediator role it enacted way back in time to solve the Ukraine crisis didn’t end up being as tactful as what Ankara hoped for. The damage in ties that Ankara wrought after its blockade of Black sea and the Moskva sinking is still running high inside Putin’s cerebrum.

But Putin in a final say has placed a trade that would invariably give more horror than dreams for Recep Tayyip Erdogan. Putin will give a “yes” to the incursion of Turkey in the northern region only if Turkey allows the Assad-IRGC offensive supported by Russian airpower to wrest control over the Jabal-Al Zawiyah region, the area where Turkey now holds sway with growing long term roots in the northern Syrian enclave.

The challenge is brewing up for Turkey in Syria with this unusual move. With no chance left, Erdogan has no option but to agree with Putin, and if that happens it will be zero return for Turkey in the Jabal-Al-Zawiyah region. It’s a matter of prestige and a long enduring fight. Erdogan won’t make matters that simple.