On the 100th day of the Ukraine war, Biden lends a strong message to Ukraine — ‘SURRENDER’ 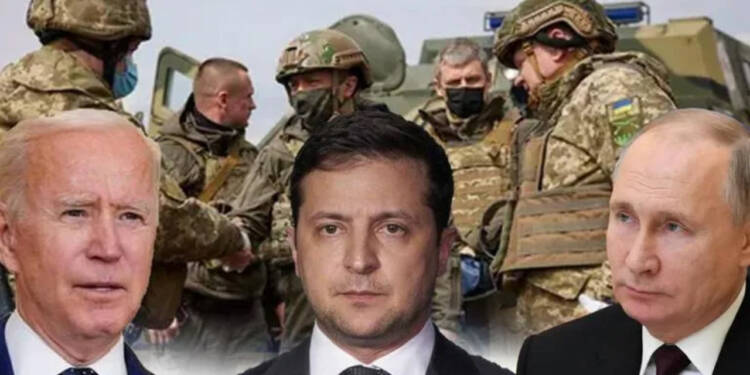 This week, The Russia-Ukraine war entered its 100th Day. Initially, the West expected the Ukrainian military to defeat the world’s second most powerful army.

However, in the last 100 days, Ukraine has lost ground, credibility, and even support that it had in the early days of the war. And now, Volodymyr Zelensky is being asked to ‘surrender’ from its own allies.

The West’s expectations have dealt a huge blow. The Eastern side of the Ukraine territory is almost seized by the Russian forces which makes it enough to suggest who is actually winning the war.

According to Ukrainian estimates made public by Volodymyr Zelensky, Russia has occupied one-fifth of the country already.

Now, US President Joe Biden has given Volodymyr Zelensky a bit of advice to bring the Russia-Ukraine war to an end. His advice is sensible, given the present state of the Ukrainian military. The US President has advised Ukraine to ‘surrender’ against Russia, and cede a part of its territory. Yes, you read that right.

Biden’s shift in the last 100 days

When being questioned in the White House over whether Ukraine would cede its territory. Joe Biden gave an astonishing answer. Joe stated, “From the beginning, I’ve said and I’ve been — not everyone’s agreed with me — nothing about Ukraine without Ukraine. But it appears to me that at some point along the line, there’s going to have to be a negotiated settlement here. And what that entails, I don’t know. I don’t think anybody knows at the time. But in the meantime, we’re gonna continue to put the Ukrainians in a position where they can defend themselves.”

Joe Biden has finally understood that Ukraine cannot emerge victorious from this war. It’s simply not going to happen. So, Ukraine should mentally prepare itself to lose the Donbas region, chunks of South Ukraine, and the city of Mariupol.

This is the same Joe Biden who once was completely confident that Ukraine is going to win the war and Russia will have to hide its face from the world. The United States was the first to push Ukraine into the war and advised the Western allies to extend their support to Ukraine.

The United States was among first of the nations that imposed sanctions on Russia. Then came visits to Ukraine by Nancy Pelosi and other Democrat leaders. Just a few days ago, the United States pledged of providing $40 billion aid to Ukraine to strengthen Kiev’s military as it had only one purpose, to ‘weaken’ the Russian Military.

But, the situation has now gone so bleak that Joe Biden himself had to step back. Well, several US officials like Secretory of Defence Lloyd Austin, and Secretory of State Anthony Blinken were already hinting that the war isn’t bringing them the desired result.

The major turning point of the war was when Russia seized Mariupol and more than 2400 Ukrainian fighters had to surrender. As per CNN, the US officials were regularly meeting with their British and European counterparts last month to discuss potential frameworks for a ceasefire and for ending the war through a negotiated settlement.

Whereas, several allies who were once staunch supporters of the ‘Defeat Russia’ mindset have also taken a paradigm shift.

Last month, US’ NATO ally Italy also presented a four-point peace plan to United Nations Secretary-General Antonio Guterres to end the conflict in Ukraine. The blind-eyed US did not welcome the move as it was expecting Russia to “fail.”

Similarly, Germany has also started to turn its back on war and is shifting the focus back on China. French President Emmanuel Macron was also confident that Russia will be defeated in the most brutal manner. But now, he is also insisting to stop humiliating Russia, so that there is an improvement in diplomatic relations between the West and Moscow whenever the war comes to an end.

Read More: France and the US suggest that Russia has won the War

Maintaining the NATO alliance’s unity was also a critical policy. But, even that failed. This was never a Russia-Ukraine war. This was a proxy war between Russia and the United States. Ukraine is nothing more than a battleground. Joe Biden has finally realized that engaging Putin in Ukraine has failed and hence the advice to ‘surrender’ has come up.