Kishida wants to save Ukraine, while China eyes Japan 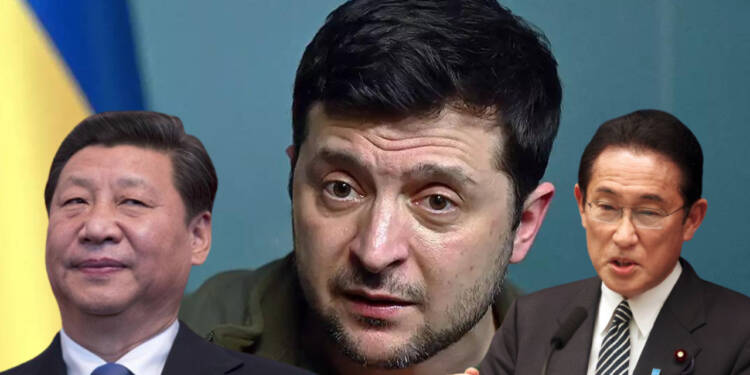 The Japanese Prime Minister Fumio Kishida is not at all a strong China-Hawk. In addition, China doves are making a reappearance in Japan, and they are growing vocal with each passing day. Japan has reached where it is today after overcoming multiple challenges.

This is even pushing Japan’s sovereignty into a ‘risk zone’. Since the beginning of 2022, China has infringed on Japan’s territorial waters a total of seven times.  It is no secret that China is an inherently expansionist nation, which the Chinese Communist Party has turned into its fiefdom. So, ‘peace’ with China is an impossibility. Nobody can be at peace with China.

The blind eyed Kishida doesn’t want to take on China but wants to save Ukraine while aligning with NATO.

Kishida wants to save Ukraine

In a very baffling move, Japanese Prime Minister Fumio Kishida is rushing himself to attend a NATO leaders’ summit in late June in order to stimulate coordination with the West over Russia’s invasion of Ukraine. The NATO summit is scheduled for June 29-30 in Madrid, Spain.

Although Kishida has often condemned Russia for what he has called a “war crime” against Ukraine, the move would be extraordinarily bold for a Japanese leader. In the past, as the two countries pushed over decades-old territorial claims, Japanese officials take a cautious approach to their relations with Russia.

Japan has been invited to the summit, along with Australia, New Zealand, and South Korea, as NATO’s Asia-Pacific partners. The attendance of Kishida at the meeting will be hailed as sending a strong message of world solidarity on the Ukraine situation, according to people familiar with the matter.

Before the Ukraine invasion, Tokyo and Moscow were sort of amiable with friendly overtures. It seemed only a matter of time before the two countries would sign a peace treaty.

However, Kishida’s rally behind US President Joe Biden led to  Japan becoming Anti-Russia. Japan also imposed sanctions on Russia. Putin retaliated by withdrawing from talks with Tokyo on a peace treaty. In relation to the disputed Kuril islands, Russia also halted joint business ventures with Japan.

Remember, whenever a void is formed, China rushes in, and this is exactly what is happening right now in the Senkaku Islands, where China has already begun to break maritime norms.

A few weeks ago, Two Chinese vessels entered Japanese territorial waters near the disputed Senkaku islands, which are claimed by both Japan and China. The Chinese ships reached the Senkaku island, also known as the Diaoyu Islands leaving the world amused.

Not only this, similarly eight Chinese warships, led by the People’s Liberation Army (PLA) Navy’s aircraft carrier Liaoning, passed between the Okinawa island chain in southern Japan in a show of strength described by state media as preparation for missions that include a potential military conflict across the Taiwan Strait.

China is also trying to create local industries inside Japan to reduce its reliance on imports. China has been increasingly gaining control over Japanese industries like semiconductors and fuel supplies that can turn into transit in near future.

These indications are alarming for Japan as it indicates that China’s gaining control over the region and this is all because of Kishida’s negligence.

Read More: China could stage a hostile takeover of Japanese semiconductor firms to heal its wounds

Kishida keeps enchanting US’s tone that Russia is the rude dude. But, this is pushing Japan’s own sovereignty and security at risk. Xi is eyeing taking disputed South China sea islands whereas, Japan is not even bothered about it.

Putin’s Houdini Act: Expected at Kharkiv but arrived in Kyiv