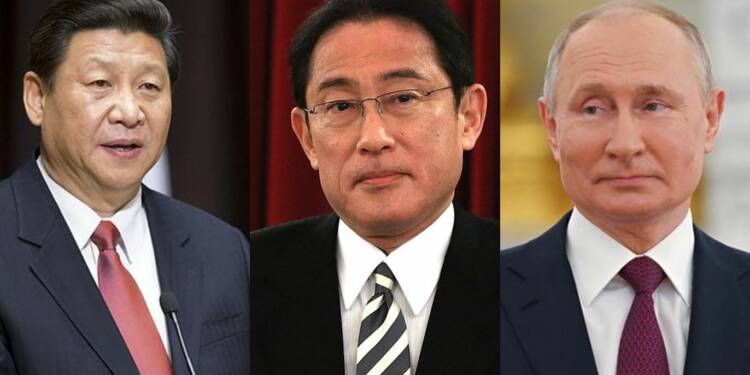 In September, TFIGlobal had reported that Russian President Vladimir Putin made a big push for advancing Japan-Russia peace even as former Japanese PM Yoshihide Suga announced his resignation. As it turns out, the appointment of Fumio Kishida as Japan’s Prime Minister has actually opened up the possibility of peaceful relations between Japan and Russia.

In fact, Kishida and Putin find a common enemy in the Chinese President Xi Jinping. So, the two leaders are likely to resolve historical differences between Japan and Russia and agree on a mutually workable relationship to isolate China. This effectively brings in ideas like a Russia-Japan alliance under Kishida or Japan’s Quad plus Russia strategy to counter Chinese aggression.

You might be wondering why we are interested in stalking Kishida’s telephonic conversations. Well, it sends out a loud and clear message – Kishida is looking to cooperate closely with Japan’s Quad allies. At the same time, he is looking at a better relationship with Russia. And after talking to all Quad leaders as well as Russian President Vladimir Putin, the Japanese PM gave a stern warning to Chinese President Xi Jinping.

Japan and Russia to resolve the Kuril Islands dispute:

Japan and Russia have not been able to maintain good ties in the aftermath of World War II due to the Kuril Islands dispute.

The Kuril Islands dispute is at the root of cold relations between Japan and Russia. The subject of the dispute is four islands – Kunashir (known in Japanese as Kunashiri), Iturup (Etorofu), Shikotan and the rocky Habomai islets.

Russia calls the disputed islands Southern Kurils, and Japan calls them Northern Territories. In 1855, Russia and Japan signed the Treaty of Shimoda, which gave Japan ownership of the four Southern Islands and Russia ownership of the rest of the Island chain in the North.

Yet, during their phone call, Putin and Kishida seemed to agree that they must get over the Kuril Islands dispute.

As per the Japanese Ministry of Foreign Affairs, Kishida “stated that he attaches great importance to Japan-Russia relations and that he would like to develop overall Japan-Russia relations in a mutually beneficial manner, including the issue of concluding a peace treaty. He also stated that he would like to firmly work on the Northern Territories issue with President Putin without leaving the issue to the next generation.”

On the other hand, Putin “stated that he intended to continue dialogue concerning all bilateral issues, including the issue of concluding a peace treaty.”

China is the reason why Japan and Russia are ready to resolve their differences:

Well, Japan hates China, and the world knows it. Japan and China have historically bad ties due to the pre-Second World War differences between China and Imperial Japan. Japan turned into a pacifist nation after the Second World War and the US took advantage of the situation.

Tokyo could not improve its ties with historically inimical powers like China, Singapore, Taiwan and Korea even after the Second World War. Moreover, the domination of American influence in Japanese military strategy ensured that Japan could never go out of its way to forge a partnership with countries like Russia.

However, Japan is no longer the passive and pacifist nation that it used to be. It is forming its own foreign policy and military strategy and deciding its own priorities on tricky issues like a partnership with Russia. Mostly, Japan is guided by the China threat including Chinese intrusions into Japanese waters near the Senkaku Islands over the past one and a half years or so.

On its part, Moscow remains sceptical and even angry about issues like China’s attempt to stake a claim in the Russian Far East or Beijing’s strategy of eating into Russia’s sphere of influence in Eastern Europe and Central Asia. In the Arctic, a region that falls entirely in the realm of Arctic powers like Russia, China is trying to expand its footprints through sheer belligerence.

Then, Russia is also worried about issues like Chinese attempts to steal Russian defence designs and Beijing-backed cyber-attacks on its systems.

All in all, both Russia and Japan have way too many issues to handle with China. As such, Tokyo and Moscow don’t have such major concerns with each other except the Kuril Islands dispute which is in itself turning anachronistic and reconcilable.

Russia has been trying to marginalize China from the Korean Peninsula by mediating better ties between South Korea and North Korea. However, Putin’s efforts have been impeded by US President Joe Biden, who has a political agenda to fulfil by refusing to hold a dialogue with North Korean Supreme Leader Kim Jong-un.

However, Kishida has shown the willingness to meet Kim and play a role in resolving the issue posed by North Korea’s nuclear missile programme. The US may be hindering Putin’s efforts in resolving the Korea issue, but Japan seems ready to help Russia in isolating China in the Korean Peninsula.

With Kishida, Japan and Russia are coming closer, and this should send warning bells ringing for Beijing.