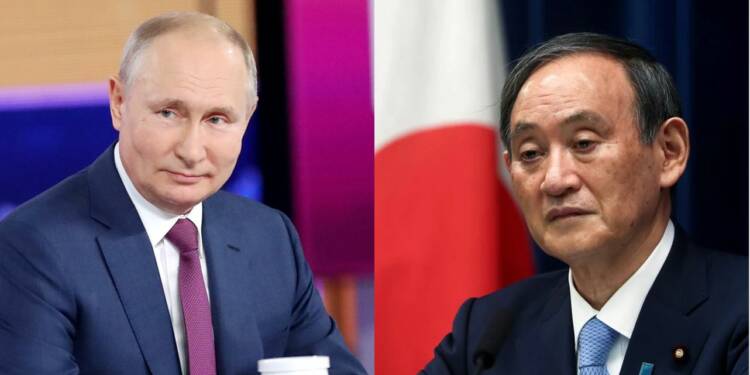 Japan’s politics is changing again. And so is Russian President Vladimir Putin’s external policy. Two weeks ago, Japanese PM Yoshihide Suga was in power and Moscow had announced plans to militarise the disputed Kuril Islands. Now, Suga has stepped down, Japan is awaiting a new leader and Putin is talking peace.

On Friday, Suga said that he would not run in the ruling Liberal Democratic Party’s leadership elections, which effectively means that he would step down as Japan’s Prime Minister merely a year after he took over from Shinzo Abe. Meanwhile, Putin has described the absence of a post-World War II treaty between Russia and Japan as “nonsense”.

Suga seems to have given in to mounting public pressure following his low approval ratings and criticism over the handling of the COVID-19 Pandemic and holding Tokyo Olympics 2020 despite objections by health experts.

Interestingly, Putin’s remarks about the lack of a peace treaty between Russia and Japan came almost simultaneously with Suga’s announcement of stepping down as Japan’s Prime Minister. Speaking at an economic forum in Vladivostok, Putin asked Japan to “ensure a peaceful future”.

The Russian President also complained that the two countries have repeatedly agreed on joint work on the Kuril Islands, which are called Northern Territories in Japan, but Japan “repeatedly revised its stance.”

There is a lot of symbolism in Putin’s speech. The fact that he spoke about peace with Japan during an economic forum at Vladivostok is an indication towards China.

China claims to be Russia’s friend, but the paper Dragon also stakes claim on the Russian Far East including the capital city of the region, Vladivostok. So, Putin is inviting the future Japanese leader to join hands with Russia in order to counter the common enemy called China.

Kuril Islands dispute- a legacy of the Second World War

The Kuril Islands dispute is at the root of cold relations between Japan and Russia. The subject of the dispute is four islands – Kunashir (known in Japanese as Kunashiri), Iturup (Etorofu), Shikotan and the rocky Habomai islets. In 1855, Russia and Japan signed the Treaty of Shimoda, which gave Japan ownership of the four Southern Islands and Russia ownership of the rest of the Island chain in the North.

After the Second World War, Russia took control of the four Southern Islands and started administering them. The 17,000 Japanese residents on these Islands were dismissed to Japan by 1949. Since then relations between Japan and Russia (or the erstwhile USSR) have been marred by the territorial dispute.

Anyhow, Russia doesn’t want an acrimonious relationship with Japan. Putin realises that an expansionist China is a bigger threat for Russia and therefore he has been repeatedly trying to seek Japan’s cooperation in developing the Kuril Islands jointly.

Abe enjoys a lot of influence over the two largest factions of the LDP and therefore he is poised to be the kingmaker in the LDP leadership race. The next Japanese PM maybe a man of Abe’s choice and given the former Japanese Prime Minister’s deep-rooted hatred for China, we can expect the next Japanese PM to be anti-China hawk.

With an Abe-backed anti-China hawk likely to take over as the Japanese PM, Putin seems assured about the greater scope to strike a peace deal with Japan. He knows that both Moscow and Tokyo are wary of Chinese belligerence.  Now, with an anti-China leader set to take over in Japan, Tokyo and Moscow must not waste the opportunity of burying their hatchet and forming a formidable alliance to take on the paper Dragon.