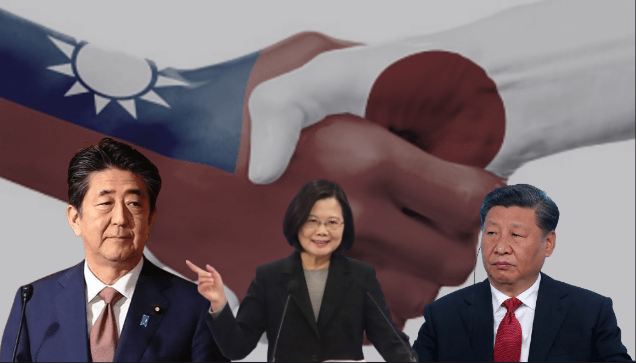 Former Japanese Prime Minister Shinzo Abe – as the longest-serving Prime Minister of his country drastically oversaw, and led an effort to transform Japan’s defence and foreign policy. From a pacifist state, Japan was turned into an activist nation, which called on the world community to turn their attention to the grave threats posed by China in the Indo-Pacific. Today, even though Abe is not in office, the world has certainly not heard the last of him. China, particularly, is enraged. Shinzo Abe recently came out and voiced his unflinching support for Taiwan. He also declared his commitment to visit Taiwan as soon as the situation permits, referring to the Covid-19 pandemic which originated from China.

On Thursday, speaking at the Trilateral Strategic Dialogue hosted online by the Japan-Republic of China Diet Members’ Consultative Council, Shinzo Abe called on the U.S. and Taiwan to join the Comprehensive and Progressive Agreement for Trans-Pacific Partnership to further economic cooperation between the trio. He expressed support for Taiwan to join the World Health Organization as an observer. The former Japanese Prime Minister was also quoted as saying, “What happened in Hong Kong must never happen in Taiwan,” referring to the draconian Chinese crackdown on the erstwhile free city.

Abe added, “I find the unilateral attempts to change the status quo in the South China Sea and the East China Sea concerning.” Shinzo Abe said the biggest issue facing the international community in the 21st century is dealing and interacting with a rising China, which has increased its military expenditure by 42 times in the past 30 years.

Abe said during the Cold War era, the organization that was founded to support the value of democracy and freedom is NATO and in the 21 century, the international community's biggest task is to cope with the rise of #China.

Read more: After rattling China on the Taiwan front, Japan begins its assault against China in Central America and Cuba

Lee – known as the “father of democracy” in Taiwan, was buried at a national cemetery for veterans and high-ranking officials on the outskirts of Taipei after he passed away last year at the age of 97. Taiwan’s Ministry of Foreign Affairs (MOFA) has welcomed Shinzo Abe’s wish to visit Taiwan, and offered all necessary assistance to make the trip happen.

Shinzo Abe’s statements have not gone down well with China. Chinese wolf warrior Zhao Lijian, on behalf of the CCP said, “Any attempt to create two Chinas, or one China and one Taiwan, will fail.”

Any attempt to create two Chinas, or one #China and one Taiwan, will fail, said spokesperson of Chinese Foreign Ministry on Thu after former #Japanese PM #ShinzoAbe expressed concern over China's military buildup and vowed to not let #Taiwan become the next #Hongkong. pic.twitter.com/emCNaAOPj0

Meanwhile, Japan is profusely hurting Chinese sentiments at the ongoing Tokyo Olympics. NHK, which is Japan’s public broadcaster had one of its anchors introduce Taiwan’s team as “Taiwan” instead of the obligatory “Chinese Taipei” at the opening ceremony of the Tokyo 2020 Olympics. Furthermore, as the country began to win medals at the games, Taiwanese netizens noted that NHK’s medal table on its website listed the team as “Taiwan” (台湾) in Japanese Kanji. China was visibly quite irritated, and called such happenings as “tricks”.

Earlier this month, Japan effectively abandoned the ‘One China’ policy as it showed Taiwan as a separate and free entity from China in its annual defense white paper. In this year’s white paper, Taiwan is completely greyed out from the map of China and its combat theatre commands. In previous defence white papers, Japan had displayed the island nation as a part of China. Japan has also committed to militarily protecting  Taiwan along with the United States if China were to launch an invasion against the democratic island nation.

Japan is therefore pursuing a very proactive anti-China line, and it almost seems to be enjoying getting on China’s rather thin nerves. China thought no world power would dare rise up to its aggression across the Indo-Pacific. However, the entire free world order is up in arms against Beijing. Shinzo Abe lies at the centre of rising awareness around the world against China’s devious designs. He, as Prime Minister definitely, and now, even after retiring is playing a tremendous role in galvanising public and political opinion against Beijing. By visiting Taiwan and paying tributes to its first leader, Abe will effectively send out a message that the world community will not be able to ignore.