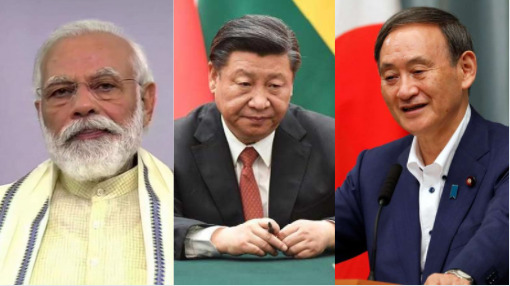 For a very long time, China has tried to keep India embroiled in the South Asia region by directing a threat of a two-front war, however, in recent times, India along with Japan have created their own dual front in the larger Asian geopolitical space to contain China and Xi Jinping. While on one hand, India is re-enforcing its Himalayan borders and at the same time coming out in open for its support of Dalai Lama and Tibet, on the other hand, Japan has come out in full support of Taiwan and is working on economic and strategic cooperation with like-minded countries in East and Southeast Asia.

Tibet is one of the largest storage of freshwater and provides a good strategic position vis a vis India. On the other hand, China also holds that the union with Taiwan is of paramount importance. However, both India and Japan have upped their ante and come out in support of Tibet and Taiwan respectively.

For a very long time, successive Indian governments have maintained an arms distance from the Dalai Lama and the issue of Tibet’s independence. However, Indian Prime Minister Narendra Modi has changed this course and called the Tibetan spiritual leader and wished him on his 86th birthday. This has not only made it official that the Indian government recognises the Dalai Lama as the Tibetian spiritual leader, but by doing this, he has also made sure that India will stand behind Tibetian people and help them safeguard their cherished culture and practices.

There are over 200,000 Tibetans living in India, and they are all elated with the Indian government’s new Tibet policy. Make no mistake, Prime Minister Narendra Modi and at least two senior ministers of his cabinet extending greetings to the Dalai Lama is no less than a massive policy shift when it comes to Tibet. It is very clear that Tibetians love India as it provided them refuge and continues to support their cause in any way, shape or form possible. One must not forget that, during the border situation with China last year, it was the covert Special Frontier Force (SFF) which comprises of Tibetian refugees trained as soldiers, that outsmarted the PLA and managed to take control of strategic height on the southern bank of Pangong Tso in eastern Ladakh.

In a bid to show its iron fist to China, India has redirected at least 50,000 additional troops to its border with China. India currently has around 200,000 troops focused on the border, a rise of more than 40 per cent from 2020. On the other hand, Japan is also giving sleepless nights to China, and Beijing is just not able to realise how it can deal with both of these countries which are increasing their diplomatic offensive with great synchronization.

Japan is one of the biggest China hawks that has emerged in the past year. Chinese aggression in the East China Sea and in the Senkaku islands has convinced Tokyo that Beijing’s intentions are devious and that it must take a lead role in securing the region.

The biggest statement from Japan came early this month. Japan’s Deputy Prime Minister Taro Aso has spelt out his country’s policy in the event of a Chinese invasion of Taiwan. While delivering a speech in Tokyo on Monday, Japan’s second-in-command was quoted as saying, “If a major incident happened (over Taiwan), it’s safe to say it would be related to a situation threatening the survival (of Japan). If that is the case, Japan and the U.S. must defend Taiwan together.” He added, “We need to think hard that Okinawa could be the next.”

And this is not it, even before the statement, State Minister of Defense Yasuhide Nakayama, speaking to the Hudson Institute think tank, questioned whether many countries’ decisions, including Japan’s and the United States, to pursue a “one-China” policy that has acknowledged Beijing over Taipei since the 1970s would stand the test of time adding that it was critical to “wake up” to Beijing’s pressure on Taiwan and protect it “as a democratic country.”

This is coming at a time when the USA is shying away from publicly coming out in support of Taiwan. Indo-Pacific Coordinator Kurt Campbell on 6th July made it clear that the United States of America does not support Taiwan’s independence. When asked about the US’s relations with the island nation which China claims to be its own province, Kurt Campbell said “We do not support Taiwan independence.”

The US is shying away from coming in support of Taiwan and is sticking to the 70s policy of former President Richard M Nixon. Sino-US détente back in 1972 forced India and Japan to shun away from their support for Tibet and Taiwan. Modi and Suga have successfully rejuvenated their anti-China plans now. India and Japan have come out with the lionheart and are sticking it to China upfront. While India has gone all out against China on the Tibet issue, Japan is making them sweat on the Taiwan front.