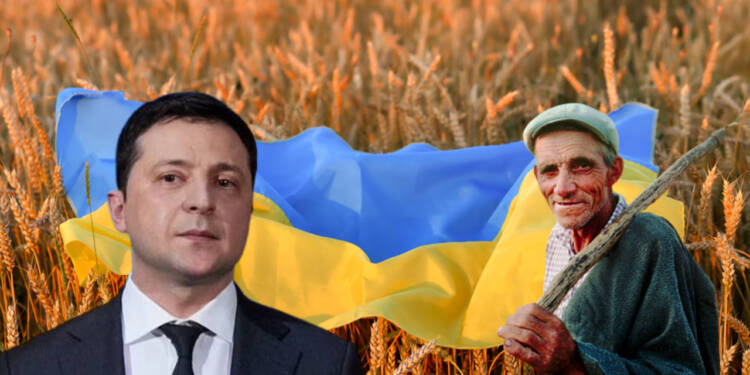 Do you know who is the biggest enemy of Ukrainian farmers? Who do you think wants the grain reserves lying open in Ukraine to not reach Europe? And who wants Europeans to die of hunger?

Who do you think wants the current crisis in Ukraine to continue and let the Ukrainians keep suffering?

If your answer to the above questions is Vladimir Putin, then you are highly mistaken.

Farmers in Ukraine are waiting to harvest 2.4 million hectares of land worth $1.435 billion, but their President Volodymyr Zelensky doesn’t want them to do so.

Can you guess why? Because he wants to blackmail Europe and threaten it till it dies a hungry death or gives grants and weapons to Ukraine.

As the war continues to unfold, and the Russian victory becomes more and more inevitable, Europe is getting more and more anxious about helping Ukraine. Europe has realized that it is putting money on a lost horse, or simply the fact that Ukraine is lost and there is no need to help it anymore.

The Ukrainian economy going down

The World Bank has predicted that Ukraine’s economy will contract by 45% in 2022 and the current conflict in Ukraine has already given a loss of $4.292 billion to the Ukrainian economy, but the ‘Bunker King’ of Ukraine wants the losses to exceed by another $1.435 billion.

Ukraine exported on average about 6 million tons of agri-commodities monthly to the countries in the Middle East, Asia, and Africa before Russia invaded it. Currently, only about 15 to 20 per cent of this volume can be exported via rail and the Danube river. But in recent months the volumes have fallen to about one million tons, sparking global grain shortage concerns and price spikes. But we feel sad to notify you that ‘Bunker King’ of Ukraine could have easily stopped all of this but he did not.

At TFI Global, we also covered how Ukraine was unwilling to demine the ports through which its grains could be exported to Europe or rather to the rest of the world. Ukraine also refused to accept the Turkish proposal of transferring the grains through the Bosphorus strait in the Russian ships.

So, why is Zelensky doing all this? The answer is simple he wants money and weapons, and for that, he is ready to sacrifice the lives of poor Ukrainian farmers.