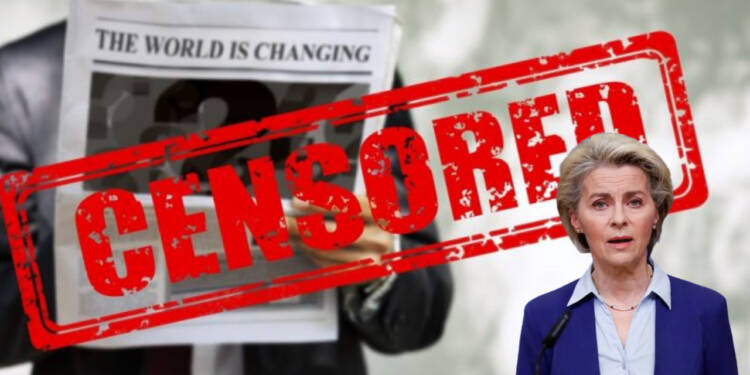 We asked you, at the start of the Russia-Ukraine war who was winning the war in media? Of course, it was Ukraine. The nation was shown as a strong bastion standing against Russia. But, the tide started to turn in just 45 days as the independent media and other media portals started debunking the narrative war.

The world got to know that Ukraine is actually doomed. This revelation came as a big setback for the Western world. No doubt this made these conservative voices other than media conglomerates their biggest enemy.

So, a crackdown mechanism has started to take shape, so another such blunder in narrative war doesn’t push back the west in setting up its agenda.

This policy is entitled as 2022 Strengthened Code of Practice on Disinformation. Through this, the EU wants to bring in a more diverse range of stakeholders than ever, empowering them to contribute to wide-ranging improvements by signing up to precise commitments relevant to their field.

These commitments include demonstrating the spread of disinformation; ensuring the transparency of political advertising; strengthening cooperation with fact-checkers; and making data more accessible to academics.

But, the policy is actually selective towards a set of people. Through this, the EU wants to curb conservative voices over social media and wants mainstream media to continue to spread government propaganda and “fake news”.

The EU has pushed forward the Code of Practice which contains 44 commitments and 128 specific measures. This will allow the bloc to systematically restrict freedom of expression and independent analysis across the continent by dirty tricks like penetrating independent media. We’ll explain how:

The new code does not even touch mainstream media practice of fake news, nor does empower to curb lies of senior government officials. The sole objective of this new code is to curb fake news, regarding Covid-19 and the war in Ukraine.

In the words of  Věra Jourová, EU Commission Vice-President for Values and Transparency, “Disinformation related to the coronavirus crisis and Russia’s war in Ukraine clearly show that we need stronger tools to fight online disinformation.

Till now, the EU Digital Strategy has enlisted Facebook (owned by Meta), Microsoft, Google, Twitter, Twitch, and TikTok as the primal focus to cut ‘so-called misinformation’. For this, the EU would push to cut the revenues of these independent outlets.

Now, who are these malicious actors? These are those guys that EU will attack who share different views from the mainstream media. Once the bots flag the media, a malicious tag will be given or the content will be shadow banned. This has happened with TFIGlobal too.

In addition, the code does not even mention how exactly the fact-checking process will be done? More likely, these fact-checkers themselves will be liberal or state-backed too.

Read More: Liberal media has laid a trap for conservative voters in America

The story of ‘Ghost of Kyiv’ was a mere example of the west’s deception and use of misinformation in the propaganda warfare in the ongoing battle. Ukraine was winning from the first in the mainstream media. But, then there was independent media that portrayed the exact scenario and actual destruction of Ukraine.

This triggered a shift of stance amongst the world that they are wrong about the war. In addition, this has harmed many EU leaders politically. The conservatism is again re-rising inside the continent and this is a sure-shot alarm for liberals.

This is why the revised version adopted on 16th June 2022 is slated to become ‘mandatary’ for social media. This is more like curbing voice, censorship in derogation of fundamental human rights.

Collection of 28 No friends quotes and captions