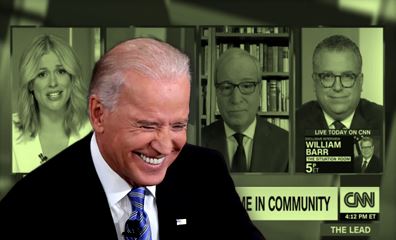 There seems to be a media consensus in the US. It is overwhelming and the conclusion is that Democrats are going to lose big in the upcoming midterm polls.

Given the Biden administration’s disastrous performance, a catastrophic result is more or less certain. But why exactly is the liberal media so vocal about it, despite unofficially pledging loyalty to Joe Biden and the Democratic Party?

Read more: After Biden, the US won’t see a Democratic President for decades to come

Liberal media has announced its verdict. It says that Joe Biden and the Democrats are going to have an awful time at the upcoming midterm polls.

The Hill was quite brutal in its analysis and stated, “Biden is Handing the Midterms to the GOP.” And yes, even CNN stated, “It is a pretty dark time to be a Democrat facing voters this fall.”

Why is the liberal media making catastrophic predictions for Biden?

So, this brings us back to the main question- why is the liberal media that used to rally behind all of Biden’s blunders making such catastrophic predictions.

Well, we have a precedent that the American liberal media may be following- the 2004 Parliamentary polls in India.

The 2004 elections in India were touted as a possible turning point at the time. The Bhartiya Janta Party (BJP), to which incumbent Prime Minister Narendra Modi belongs, was rising in terms of pan-India popularity. For many, it meant that the days of the Indian National Congress (INC) were over after several decades of power.

At that time, the liberal media was projecting a grand victory for the BJP in 2004. The BJP was going to polls following six years of healthy growth, nuclear bomb tests, and a successful war effort against Pakistan under a coalition government headed by late Atal Bihari Vajpayee.

There was every reason to believe that the BJP will come back to power with a huge mandate. The media started predicting a major victory for the BJP. Every opinion poll favored the party. However, the results came out as a big shock. The INC managed a small lead over the BJP and formed a coalition government.

How does liberal propaganda work?

So, why did the BJP lose in 2004? Well, the liberal mainstream media successfully created a narrative that the party is going to win anyway. So, some sort of fatigue set in party supporters and voters. As a voter, when you take your ideology’s victory for granted, you are no longer keen on exercising your franchise. However, a few votes here and there can make all the difference as it did in 2004.

So, an average Conservative in the US needs to understand that the liberal media is playing with his mind. You are being told that the Republicans are going to sweep the upcoming midterms.

For the Republican Party, it gives a false sense of assurance. It might feel that even if it goes soft, the upcoming midterms will be a cakewalk. However, the thumb rule of any polls campaign is that if you don’t speak, you don’t win.

For the Republican voters, a complacency of the sort has piled up with the idea that even if they skip voting, no harm will be caused. This is how the liberal media is trapping the conservative voters.

However, the Republicans need to understand that they must keep working against the Democrats and sweep the upcoming midterms, instead of blindly believing what CNN has to say.