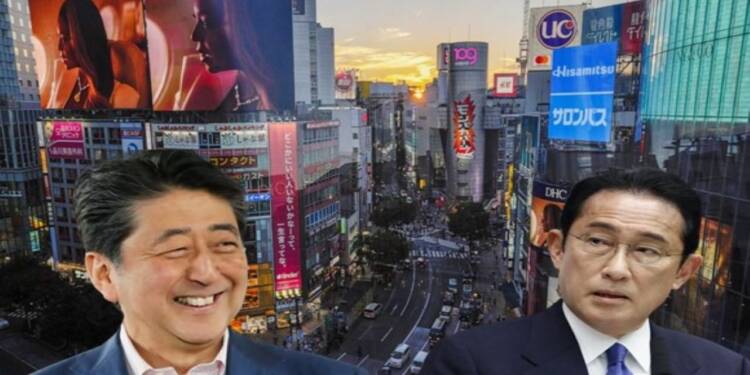 When Fumio was sworn in as the Japanese Prime Minister back in 2021, it was honestly thought that Shinzo Abe’s former foreign minister would uphold Abe’s legacy to the very end. However, the truth has been very disheartening.

Kishida has ditched the hawkish path followed by Abe and sadly Japan is again heading to become a pacifist nation. Abe spent his eight years in office diluting the restrictive clauses of Article 9 of the constitution, which contains the “No War” clause and arming its defence forces to the teeth. Kishida, on the other hand, has started to go exactly in the opposite direction.

You see, Shinzo Abe is surely not in office but he still has a tremendous influence over Japan’s administrative powers. It seems like Abe has had enough of his ex-aid. Possibly, Kishida’s final hours have dawned.

Recently, Kishida unveiled his ‘New Capitalism’ policy guidelines outlining his economic policy. But this plan had no substantive details or proposed measures to achieve the target. Moreover, there were no signs of specific measures to help startups.

The question of what Prime Minister Fumio Kishida’s language of “new capitalism” implies for governmental policy has been raised by entrepreneurs working to establish startups in Japan, along with economists, market participants, and business executives.

The startups in Japan are facing a financial crunch amid deteriorating global economic conditions. The startups yearned for reforms and transparency in the tax system and fresh incentives for entrepreneurs. But, the harsh reality is that Kishida ignored the rising startups in Japan.  While the Japanese PM has repeatedly called these startups “the engine of economic growth and innovation”, no steps have ever been taken by his administration to address the myriad issues that Japanese startups face.

Read More: Fumio Kishida will go down in history as one of the worst Japanese Prime Ministers

Shinzo Abe, back in 2012, released a set of new economic policies for Japan. The economic plans were known as Abenomics. Make no mistake, Japan went through a lot of political uncertainty and economic stagnation before Abe came to power, led the country for nine years and revitalized its economy. He brought GDP growth back on track, improved the Japanese stock market and paved the way for strong corporate profits.

Abenomics was even effective in supporting large firms by boosting equity markets and nurturing the sense of stability that a sharp appreciation of the yen would not happen again.

Furthermore, it is to be noted that at the end of World War 2, Japan and many other major world economies were in tatters. Yet, Japan carried on as the second most powerful economy in the world because it never depended on the world for running its economy. The Japanese government contributed to the post-war Japanese economic miracle by stimulating private sector growth, first by instituting regulations and protectionism that effectively managed economic crises and later by concentrating on trade expansion.  History is a witness to how Japan produced goods themselves and sold them to the world, making products the best of its class. Toyota, Mitsubishi, Toshiba, etc. the list is never-ending.

Thus, the Japanese attitude has always been pro-growth. This positive outlook when coupled with the excellence of statesmen like Abe made Japan a powerhouse economy. Abenomics was successful in improving inflation and increasing the job rate. In addition, China’s growth was challenged by Shinzo Abe for the first time since his version of the economic policy came in.

However, Kishida in just one year has blundered the Japanese economy as a whole. Beyond sketching the map, Kishida has a lot of other things to do. The rate of inflation in Japan is growing; it reached a seven-year high in April. The yen is getting weaker while wage growth is still modest. No doubt Kishida had the responsibility of increasing the third-largest economy in the world, which contracted in the first quarter of 2022 and is still alternating between expansion and contraction. But, a target without any roadmap, is poised to make things go worse.

Read More: The Japanese Prime Minister is a Chinese pug

You see, Shinzo Abe had made a cordial relationship with business tycoons and market leaders in Japan. But with Kishida at the helm of affairs, these people have started to feel discontented.

And honestly, any Japanese youth with an entrepreneurial mindset is an asset to the future of the country. If Kishida fails to provide substantial support to the entrepreneurial class, then Japan is surely doomed.

Hence, the Japanese tycoons who flourished under Abe have started to raise voices against Kishida. This is more of a sustained protest against Kishida’s administration to stage him out as soon as possible and make the Prime Minister a person who follows Abe’s legacy of ‘zero-pacifism’ and Abenomics to its core. Not going by Abenomics could prove to be disastrous for Japan.