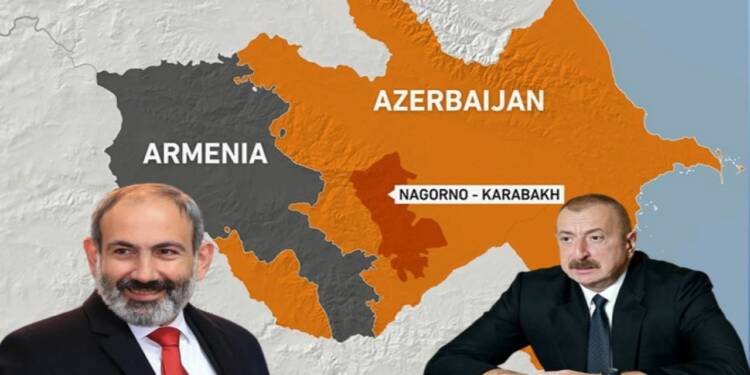 The Ukraine war is yet to wane down in full, as much of the global attention is still entrenched in the eastern European heart war land. Occasionally some kind of attention is also titled in favour of the South Caucasus. Simmering tensions were bountiful as this region drifted into a volatile field from the very go of the war that took place in 2020. Nagorno-Karabakh is left with unresolved questions that may soon get reignited following the latest goings in the region.

As the war grinds with pace in Ukraine, Azerbaijan is milking over the rising oil prices in the global energy market, thanks to Russia. Baku is set to ratchet up its state budget, and for a reason. You see, a colossal share of the spending is pivoted on increasing the defence budget for the reconstruction work in Karabakh.

“Taking into account the positive dynamics of the country’s economic indicators, as the state and consolidated budgets received more revenues than forecast, President Ilham Aliyev instructed to direct part of the growing revenues to construction work in the liberated lands,” Finance Minister Samir Sharifov told the committees.

As of June 22, the price of a barrel of Azerbaijani crude oil – branded as Azeri Light – was trading at $121.73. The 2022 budget was prepared based on a projection of oil selling at $50, but the average price of the oil in the first five months of 2022 has been $106. As a result, the state budget has seen a revenue surplus four times greater than projected.

Adding further, the tax collected this year heralds a new high and the surplus could be effectively put into use in the contested zone of Nagorno-Karabakh. While the government in Baku may have the high jinks of reaping the benefits in Karabakh, the low-income Azerbaijanis will endure a different fate. Spending on social protection for low-income Azerbaijanis, meanwhile, is projected to grow by 2.4 per cent and that for education, by 0.06 per cent. The spending on health care would shrink in the revised budget.

Talks are also running wild about how the Azerbaijan government could take leverage over this surplus revenue to make it an orchard for corruption. Azerbaijan regularly adjusts its budget to keep track of oil prices, but it tends to increase spending whether prices are going up or down. In the former case, it does so because it has more revenues to spend, in the latter because it says the economy needs a boost as incomes decline, wrote economist Elmir Mukhtarov in a recent analysis for BNE IntelliNews.

Azerbaijan has an estimated 1.3 trillion cubic metres of proven natural gas reserves, and according to the operator (BP), the Shah Deniz gas field is one of the world’s largest, currently producing more than 10 billion cubic metres per annum (bcma) of gas delivering it to Azerbaijan, Georgia and Turkey. While Azerbaijan is not as large a figure in global gas as it is in oil, gas extraction is expected to continue contributing significantly to the economy in the coming decades.

The current happenings in Ukraine have changed the picture for the central Asian country with analysts suggesting a depleting level of oil production from Baku. “Azerbaijan’s oil production is steadily decreasing, and the proven gas reserves are not even close to compensating for the lost oil revenues,” wrote economist Elmir Mukhtarov.

Even though bogged in the Ukraine war, Russia won’t stay idle to any intrusive shenanigans happening in the Kremlin’s backyard. Moscow helped forge a cease-fire deal in November 2020 and the Russian peacekeeping forces still adorn a vigilant nous in the high terrains of Karabakh. Russia’s pact with Baku is more an act of compulsion and if Azerbaijan espouses valour to outplay their ally in Moscow, Putin may simply need 10 days maximum to eradicate the whole of Azerbaijan from Karabakh.

Azerbaijan’s wish to seize Karabakh is a poorly stitched-up plan. And the worst is the timing selected for execution. A smoothly running economy will soon see the darkest of days if Baku braves such a move.

Spying, mind control, and other things: The five most dangerous ideas discussed at the World Economic Forum