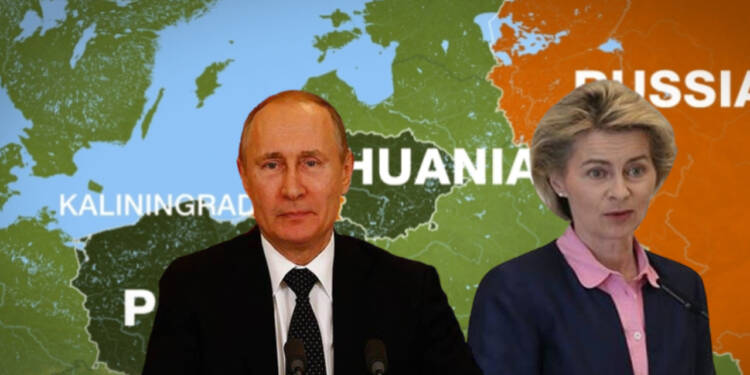 There is a 223 square km European region named Kaliningrad, encircled between Poland and Lithuania. In essence, if any military action is required, Kaliningrad has a significant ability to hinder the EU and NATO actions if required.

As Russia advanced in Donbas and Luhansk region, the news was spread that Lithuania has tried a dirty trick to mount pressure on it by blocking the import and export of a large number of goods by rail, citing it as a part of Western sanctions.

The news of the blockade of the rail route to this territory was not welcomed by Russia at all. It was taken as an ‘unprecedented’ escalation by Moscow. However, the so-called blockade was a plan of the EU to just mount pressure on Moscow but now the EU is in an apologetic mode already.

The European Union has taken a major U-turn. As per the bloc’s top diplomat Josep Borrell, the EU is not seeking to impose a “blockade” on Russia’s Kaliningrad Region. Furthermore, the EU now looks to review its sanctions guidelines to avoid “blocking” traffic into and out of the exclave.

Whatever happened in the last few days, was actually the EU’s directive. The restrictions over transit to and from Kaliningrad were implemented under EU Commission guidelines for preventing the circumvention of anti-Russia sanctions imposed over the ongoing conflict in Ukraine.

Even Lithuanian Prime Minister Ingrida Šimonytė confirmed that the transit ban on steel and ferrous metal through the EU was actually part of the bloc’s sanctions, agreed by all 27 member countries.

PM Ingrida Šimonytė stated, “As foreseen in the fourth package of EU sanctions, which was adopted on 15 March 2022, the EU’s restrictive measures on imports into and transit through the EU of Russian steel and other ferrous metal products definitively entered into force on 17 June 2022, Lithuania applies the EU restrictive measures in accordance with the EU law and in consultations with the European Commission.”

A surprising thing to note here is that this directive came into force exactly after the Russian action of revoking the independence of Lithuania in its State Duma as an answer to NATO’s military buildup in the nation.

So, the EU directive was enforced as a repercussion of Russian action. However, it appears that Lithuania overlooked the possibility that Russia may retaliate.

As the news of the blockade reached Moscow, Russia warned Lithuania of dire consequences. Nikolai Patrushev, secretary of the Security Council of the Russian Federation and Putin’s closest aid went on to declare, “Russia will certainly respond to such hostile actions.”

Furthermore, he added, “Measures are being worked out in an interdepartmental format and will be taken in the near future. Their consequences will have a serious negative impact on the Lithuanian population.”

This warning alarmed Lithuania. Immediately Lithuania declared that only 1% of goods are affected out of the total Russian freight transit to Kaliningrad. Russia chastised that the realities might be different.

As per Russia, the restrictions had the chance of affecting roughly 50% of cargo flow between the Kaliningrad and the rest of Russia.

Seeing the move getting backfired. The European Union hopped in to avert the possible next Russian aggression. The European Commission is now working overnights to defuse the growing Kaliningrad crisis amid fears of escalation.

Read More: Putin just invoked ‘Peter the Great’, and it means Ukraine is just the start

Even the EU could not have imagined that its attempt to embargo Kaliningrad in an effort to increase pressure on Russia would backfire to this degree.

Now the bloc stresses that these sanctions weren’t intended to blockade Kaliningrad; rather, they were to enable the EU to carry out more checks. So, the EU’s plan to block Kaliningrad exploded in their face.