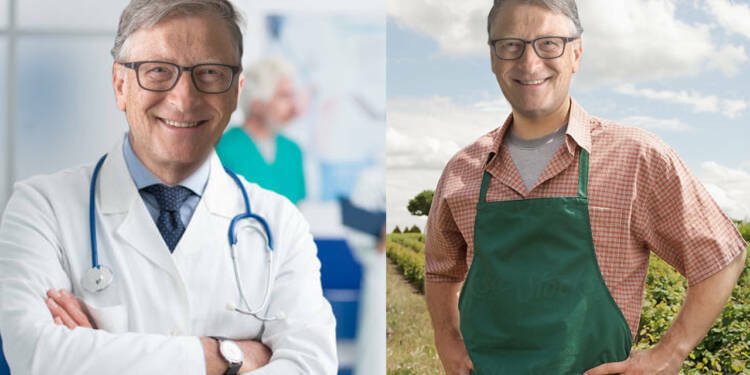 Bill Gates, a monopolist billionaire-philanthropist, has been often accused of leading the world into a crisis for his personal gains.  The U.S public health continued to be dictated by the whims of Gates throughout the entire pandemic. There was mounting criticism of Bill Gates’ role in the West’s vaccine hoarding. But this has not prevented Gates to continue to make money at the expense of ordinary citizens. Now, Bill Gates is working with Monsanto to have total control over the food supply.

A Monsanto and Gates Collab

Bill Gates is back again with his agenda to reform the world and this time, the so-called ‘philanthropist’ wants to ‘revolutionise’ the farming sector. Bill Gates has recently funded and pushed for indoor vertical farming industry at WEF. As per him, the farming industry needs to adapt to “highly innovative measures” and funding efficient measures like vertical farming might help “us replace conventional outdated models farming”.

For this, Monsanto is creating specially-tailored genetically-cut seeds which would be used in these vertical farms. You see, in the era of the 90s, Monsanto Corporation, a chemical company, was notoriously famous for pushing a devastating attack against farmers with their neurotoxic pesticides. But thanks to Bill Gates and pop culture media brainwashing, Monsanto is still a tall-standing brand.

Moreover, the University of California is developing a plant-based mRNA vaccine that farms can grow in heads of lettuce, which happens to be the main crop of these new farms.

Bill Gates wants to modify food supply chains with products of indoor vertical farming and he has already started turning his dreaded dreams into a reality. These GMO farms have started providing food at major outlets, including Kroger, Walmart and Whole Foods and are massively expanding.

You see, Bill Gates needs to convince everyone that the traditional farming methods are flawed if he wants to entirely replace them. He needs to demonstrate to people throughout the world why they should adopt his tailored genetically-cut seeds for the vertical farms in order to realise his aspirations of controlling the whole food supply. Such radical changes are only possible in the face of a major crisis. So, what could possibly happen? The answer is a large-scale famine across the U.S. This may sound ridiculous but, it is already happening in the USA.

Read More: Bill Gates – The most influential doctor and the richest farmer in America

A famine in motion

Believe it or not, the 2020 lockdowns across the world had distressed the supply chain, and its repercussions are still felt across the world. The US to be precise suffers from supply shortages of various commodities.

The supply chains felt another shock after US sanctions against Russia. This has created a major food shortage crisis. In addition, over a dozen food processing plants have been mysteriously destroyed in the past several weeks, as well as several fertilizer plants are unable to process an adequate amount of fertilizer resulting in a major fertilizer crisis.

This shortage makes enough room for Bill Gates and Monsanto to push for their collaborative profits out of Indoor Vertical farming.  The wannabe philanthropist Bill Gates is also heavily invested in creating alternative fertilizers and is also a chief stockholder of the Canadian National Railway, which claims to be helping the fertilizer market grow. So, it is highly likely that this is a well-oiled system in motion by Bill Gates to fill his pockets.

Read More: The Bill Gates connection behind the dire baby formula shortages in the US

Those who have money in their coffers have the power to rule the world. This is exactly the case with Bill Gates. He very well knows that one who controls the food supply chains yields the maximum power. Hence, these shortages and supply chain disruptions are possibly created on purpose to make a room for the arrival of new inventions in the market.