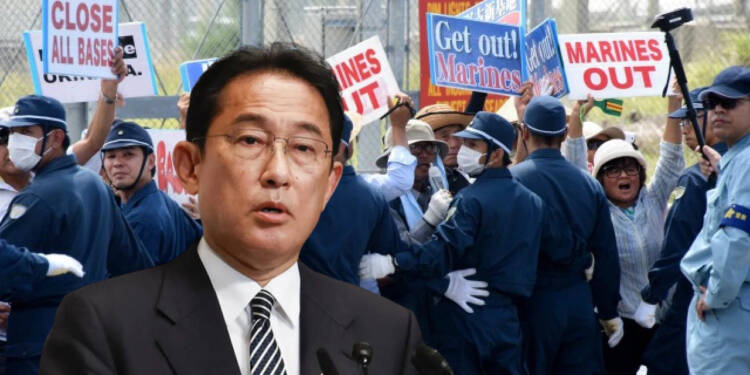 Ever since erstwhile Prime Minister Shinzo Abe left office, pro-China rhetoric is intriguingly witnessing a simultaneous rise in Japan. Fumio Kishida, the incumbent Japanese Prime Minister is the man who is aiding and abetting such rhetoric. But now, it seems that Japan has had enough of the man. Calls for him to resign are rising. Japan’s hard-earned tough foreign policy and military posture is getting marred under his regime.

Recently Japanese Prime Minister Fumio Kishida met with protests on June 23 while he was addressing a memorial service of the war dead in Okinawa. The citizens in the protest around the venue were heard yelling to “go home” and “listen to the voices of Okinawa.”

The Washington-controlled Japanese government has been pressing with the planned relocation of U.S. Marine Corps Air Station Futenma in the Okinawa prefecture city of Ginowan to the Henko district of the prefectural city of Nago. In a February 2019 prefecture-wide referendum, more than 70% of voters opposed land reclamation work off Henoko for the base relocation has always seen a wide opposition but the national government has continued with the landfill work in defiance of what the Japanese citizens were in favour of. This drew flak from the citizens sparking strong agitation from Okinawa residents.

Around the venue, people were cited holding placards that read “Go home, Kishida” and, “we will not let Okinawa become a battleground again!” As Kishida was giving his speech, protesters intermittently shouted “Don’t force military bases upon Okinawa,” and “Show your ability to listen.”

Well, this June 23 memorial service marked the first time in three years for the Okinawa Prefectural Government to invite PM Kishida to the event. Evidently, Kishida’s first attendance as the PM has gone wrong.

Japan is witnessing a pacifist approach under Kishida’s administration which is proving to be a burden for the nation. The Japanese PM is flogging all the good work of his predecessors on the ground. “Peace”, “friendly diplomacy” and “conflict resolution” are just some of the pacifist terms that are making a comeback in Japanese foreign policy. Japan is witnessing China dove’s reappearance in the nation. Which is contrary to the former Prime Minister Shinzo Abe’s foreign policy. Shinzo Abe had set in motion a policy shift from pacifism to activism.

Read More: Kishida is about to lose his chair, and we think Abe is behind it

From sharing a ‘respectable’ and ‘mutual’ bilateral relationship with China to supporting the housing of US military base in Okinawa, Fumio Kishida is all set to sabotage Japan’s activist grounds.