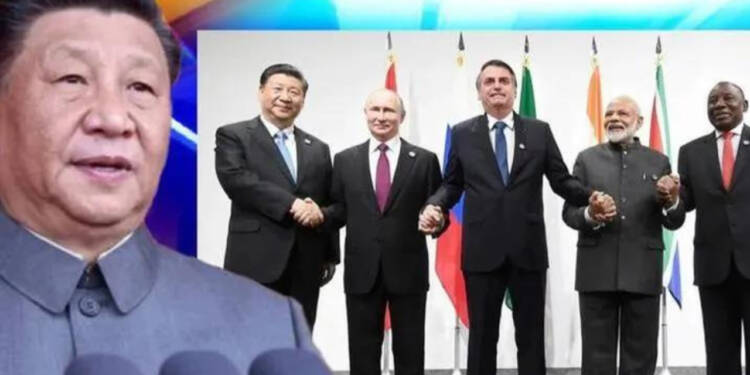 There is a group of 5 emerging economies known as BRICS. It is an informal grouping comprising of Federal Republic of Brazil, the Russian Federation, the Republic of India, the People’s Republic of China, and the Republic of South Africa. The formation of this grouping was started by Russia back in 2001 when it was just BRIC as South Africa was not a part of it.

21 years have passed since the original BRIC was formed. The core members of the group, RIC i.e. Russia, India, and China have tremendous connectivity with each other economically and financially. The core members are also responsible for global economic development to a great extent.

Their substantial population and abundant natural resources form the foundation of their influence on the international scene. But, the grouping isn’t considered as powerful as NATO by many, but why?

Well, NATO and BRICS are completely different groupings. One is a military alliance while the other is an economic one. Still, the only hindrance before BRICS becomes a major alliance is the deep-frozen ties between India and China.

CCP and the attitude of Beijing

China and its cheap politics have a long history of creating ruckus across the globe. This is the case between India and China too. But first, let’s talk about China and its leader.

Chinese President Xi Jinping’s image across the globe has not been good at all. At present, he is a leader of the CCP with a stature similar to Mao Zedong. Elected back in 2013, Xi portrayed to the world that he did a fabulous job in making China prosperous. But the reality is, that Xi has done more damage to China than anyone else.

Xi is more of a dictator rather than a leader, his predecessors were the same, yet he is far eviler.

Read More: BRICS will soon turn into SABRICS; here is what it means

The India and China angle

The relations between India and China have been based upon discernments for a really long time. India and China went into war with each other back in 1962 in the aftermath of the Aksai Chin dispute. Since then, several border disputes have concerned India and China.

While the case with previous Indian governments was to cede territory and demands of China, with Prime Minister Narendra Modi, that’s not the case. The Indian government at present puts national border and security at utmost priority.

The relations started to get bitter between Modi and Xi back in 2017, during the Doklam standoff. The dispute over Chinese road construction in Doklam, close to the triangular border region known in Chinese as Donglang, shook the world, eventually, China suffered a setback and had to back off.

Still, the trade and other businesses between the nations carried on. Then in 2020, a major military confrontation in Ladakh happened, after which ties between India and China took a major toll. Despite numerous meetings between military leaders on the ground and diplomatic communications, the relationship is still in a deep freeze.

The businesses have stopped, and the talks have failed.

Bejing in its propaganda designated India as its enemy and CCP’s actions in the last few years have also indicated the same.

CCP only started bashing India in its mouthpiece Global-times. Whereas, India began a crackdown on Chinese tech companies and investments within the nation. The renowned Tencent also became a victim of the great Indian crackdown.

This made it very obvious for China to open up a new front against India. China eased up with Pakistan and the former communist regime of Nepal to make India enter a conflicting mood. But, the plan failed as the regime changed in Nepal.

The bridge of relations between India and China is broken and to be honest, there are very bleak chances of it getting restored.

Solutions and Solidification of BRICS

Make this very sure, until Xi Jinping is in the Beijing office, there is going to be no change in relations between the Asian giants. Whereas, if CCP’s stance continues to remain hawkish towards India, the future of BRICS remains bleak.

If a new leader is elected as China’s president and CCP finally shifts its stance toward India, the core group of RIC would be stronger than any major alliance of the world.

The BRICS would be able to take major decisions about the world. Furthermore, it could also advance itself to become a new military alliance.

But, the only roadblock in fulfilling these endeavors is the bittered relations between India and China. For this, CCP and Xi Jinping are primarily responsible.