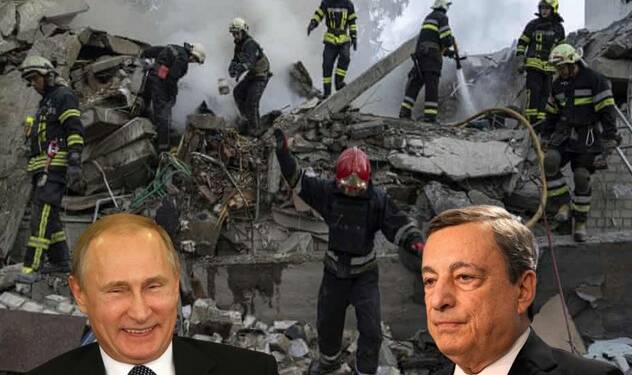 The stormy clouds of political uncertainty have started to form across the European continent. Just a few days ago, Bulgarian Prime Minister Kiril Petkov had to resign from his post after losing a no-confidence motion. Now, Italian Prime Minister Mario Draghi is going to face a similar challenge.

Well, it looks like the fall of his government is preordained. Many 5-star Movement leaders have threatened to quit the multi-party administration, claiming that Draghi has watered down or abandoned their signature policies and that they would have a better chance of succeeding in opposition.

The 5-star coalition of Italy is possibly taking its last breaths. Just before the conclusion of the NATO summit in Madrid, Italy’s PM Mario Draghi took a flight back to Italy to meet the 5-Star Coalition head, Giuseppe Conte, in a bid to resolve tensions rising amongst the coalition.

Conte, who was Draghi’s predecessor as premier, took the reins of the 5-Star Movement after his own government collapsed. However, his interactions with Draghi have grown increasingly complicated as the coalition’s members’ divisions have grown.

Conte has already started giving signs that his party may withdraw its support from the Draghi-led coalition government. Conte at a gathering with 5-Star’s ally the Democratic Party (PD) stated,  “We will discuss among our political bodies whether to remain in the government … Monday’s meeting will be important to clarify things,”

Make no mistake, 5-star is an important partner in Draghi’s coalition. Mario Draghi’s chair would be in peril if the party left the alliance. Culture Minister Dario Franceschini, a prominent PD politician stressed, “If 5-Star pulls out that will be the end of the government and it will be impossible for us to run with them at the election.”

Conte simply wants PM Draghi to provide assurances on several policies that were the primary agenda of 5-Star. But now, Draghi’s utter failure to represent the aspirations of one of its most important allies has cast a dark shadow on his future electoral prospects.

Read More: A petrified Biden ensures none of his officials ever deliver a pro-Ukraine statement

Well, Conte has time and again complained about how Draghi has failed in implementing policies such as the citizens’ income poverty-relief scheme, the introduction of a minimum wage, and state subsidies for energy-saving home improvements. But don’t be mistaken, the bite of the reality sandwich is different.

You see, the Conte-led party is reluctant about helping Ukraine. This is precisely the reason why foreign minister Luigi Di Maio formed a new group for supporting Ukraine with Mario Draghi. Conte has repeatedly unleashed a barrage of criticism over Draghi for sending weapons to Ukraine and boosting Italian defence spending. Additionally, he even resisted the government’s plans to increase Italian defence spending from 1.4 per cent of GDP to the 2 per cent NATO target by 2024. Kowtowing to the demands of America is not in Conte’s playbook.

Furthermore, Conte’s clout in Italian politics is unmatched. He recently won 93 per cent of the vote from 5-Star supporters in a two-day online poll. Well, Luigi may have helped Mario but Conte is a master politician. His support is imperative for the political survival of Draghi.

How can Putin save his chair?

Be very sure, that Draghi wants to be in the good books of Conte ahead of the crucial elections next year. This is precisely why he is making a complete 180-degree turn vis-a-vis his views on the Ukraine-Russo war.

Draghi recently even submitted a plan which called for ceding territory to Russia in a bid to end the war. Don’t be surprised if you witness such pro-Kremlin voices coming out of Italy, in the near future. Perhaps Draghi is making a fresh start with Putin in his efforts to court Conte.

Read More: A western plot to balkanize Russia gets leaked. But the one Russia has will never get leaked

Draghi wills to continue his premiership at the office. But, given the state of his coalition, only one man can save his chair — Vladimir Putin. Eventually, Draghi will have to institutionalise Conte’s policies regarding the war. The sooner Draghi realises this, the better it is for him.