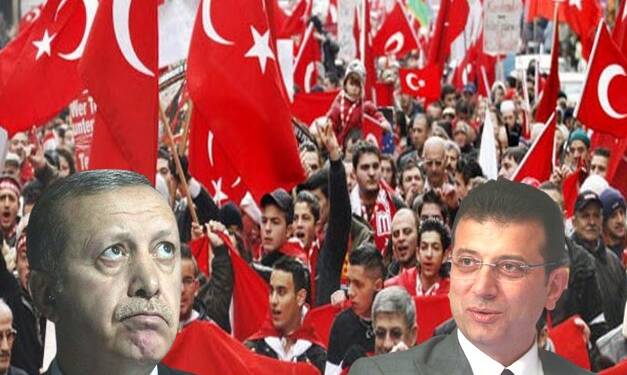 Recep Tayyip Erdogan, the president of Turkey is teetering on the edge of a political crisis, with an array of issues to solve. Erdogan cannot help but only be infuriated seeing how the economy is dipping low. Moreover, the vehement protests by the public over policy issues are producing serious questions about Erdogan’s political future.

Time is knocking on the doors as Erdogan needs to do some serious work to cement his position on the presidential throne of Turkey. The 2023 general elections have already been a talking point in Turkey’s political spheres. With Erdogan jumping ships in his stance on the Ukraine war, it is all the more necessary for the people to elect a leader who may sprout a change in a politically withered Turkey.

This is where Ekrem İmamoğlu, the mayor of Istanbul appears in the picture. The centre-left politician over time has posited himself as the bête noire of Erdogan. The Presidential aspirant made it a staple act for Ekrem to voice high condemnation of whatever quagmire that Erdogan falls into.

You see, İmamoğlu is erudite and very vocal when it comes to dissent which gives the required shrivels to Erdogan at times. For his supporters, he represents Turkey’s best hope of challenging Erdoğan’s two-decade rule and may be the one who could put a stop to the country’s slide into autocracy.

Make no mistake, the political rise of İmamoğlu has been keenly observed by none other than Erdogan. Feeling the heat, the President is triggering a new kind of political warfare with the Istanbul mayor to clear away any impending obstacle to his re-run to the highest office in Ankara.

Recently, Turkey’s Justice and Development Party (AKP) government has prohibited mayors from meeting with diplomats face-to-face or speaking over the phone with them without permission from the Turkish Foreign Ministry, local media reported.

Anyone with a sane mind could easily discern the wicked move and the timing decided to implement it. In the guise of restricting all mayors, the impetus behind this move was simply to stymie the meteoric rise of the Istanbul mayor Ekrem Imamoglu within the public.

“Our mayors aren’t the officials of the palace [President Recep Tayyip Erdoğan], [and] they aren’t the servants of the government. … Trying to cut off the communication of our mayors with the world is an indication of the fear of an oppressive administration that will soon lose power. … Our municipalities will never bow to this prohibitive, oppressive mentality,” Seyit Torun, deputy chairman of the main opposition Republican People’s Party (CHP) said.

İstanbul Mayor Ekrem İmamoğlu from the CHP also condemned the decision, saying in a speech that the ban showed nothing but the “rotten state of the central administration in the eyes of the society”.

İmamoğlu rose to a popular face in the international milieu and he has made his presence felt at UN Climate Change Conference in Glasgow (COP26) in November 2021 and the Munich Security Conference (MSC) in February.

The Istanbul mayor turned out to be a thorn in Erdogan’s eye with the former not losing any chance to speak out against the President’s facile policies. Of late the rift between these two leaders made for some excellent debates in tabloids over the future of turkey.

In an attack on the business world, Ekrem İmamoğlu lamented the fact that the nation was suffering from “the most important economic crisis in Turkey’s history, with inflation running at more than 70 per cent and poverty soaring, and yet company leaders were failing to speak out”.

You see, 2023 is a decisive year not just for Erdogan but for Turkey as a whole. İmamoğlu fears the incumbent president may even go to the extent of fabricating false charges that could decide the fate of the Istanbul mayor’s political life. An Istanbul court is yet to make a judgment on whether Imamoglu insulted election officials, and if found guilty he risks being banned from politics altogether.

Erdogan is jumping at all opportunities to prevent İmamoğlu from becoming the new big face of Turkey. Whatever the president walks into, the Istanbul mayor is simply cruising ahead garnering huge support from the public. Even survey results show İmamoğlu defeating Erdogan by a large margin. So, connecting the dots, banning mayors from meeting foreign diplomats elicit little surprise and Erdogan’s joy is simply on hold, at least until the presidential elections get over.

The great energy loot: EU has its lusty eyes set on Hungary, but Orban is no simpleton