Finally, Brazil has chosen a side in the ongoing Russia-Ukraine war 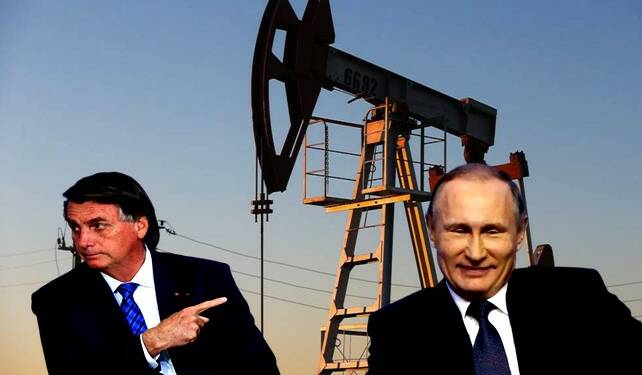 Before the start of the Russia-Ukraine war, Brazilian President Jair Bolsonaro had a formal meeting with Russian President Vladimir Putin in Moscow. On the occasion, Bolsonaro stated that Brazil is “eager to cooperate [with Russia] in various fields. Defence, oil and gas, agriculture —Brazil stands in solidarity with Russia”.

The West had condemned the visit of Bolsonaro to Russia. You see, the largest nation in South America has remained “neutral” to this day. However, as the conflict in Ukraine rages on, Bolsonaro has now realised that his country’s interests come first and that complying with Western calls to sanction Russia would be detrimental to his nation. Brazil has, thus, formally declared that it will support Russia in this conflict.

The clarion call from the Western nations was to simply avoid buying Russian oil and to start looking for alternatives. But, Brazil has clearly stated that it will not comply with such diktats.

“Brazil is looking to buy as much diesel as it can from Russia and the deals are being closed “as recently as yesterday,” Brazilian Foreign Minister Carlos Franca told reporters during a visit to the United Nations in New York.

“We have to make sure that we have enough diesel to the Brazilian agribusiness and, of course, for Brazilian drivers,”he further added.

As per the given details, the Brazilian government organized two meetings with at least three Russian diesel exporters and fuel distributors in Brazil. These meetings were also attended by Russia’s ambassador to Brazil, Alexey Kazimirovitch Labetskiy.

This trip’s main goal was to ensure that if the participating companies did business with Russian suppliers, they would not become the target of international sanctions.

This opinion was echoed by Brazilian President Jair Bolsonaro too. Bolsonaro announced that a deal was close with Moscow to buy much cheaper diesel. Make no mistake, this is a major setback moment for the west.

Read More: How Brazil saved EU by not listening to it

Just before the start of the war, Bolsonaro had ignored U.S. entreaties and met with Putin. His relationship with the Russian leader has allowed Brazil to maintain access to fertilizers, which are crucial for the country’s vast agribusiness sector.

At present, Brazil has also started to suffer from rising energy prices. Therefore, it makes perfect sense for Brazil to choose a market which provides lower prices.

Furthermore, Brazil’s move stands completely in line with BRICS nations’ ongoing solidification of trade. Franca has also referred, “Russia is a strategic partner of Brazil. We are partners at BRICS,” referring to the group comprising Brazil, Russia, India, China and South Africa.

This group is already becoming one of the most powerful emerging-market alternatives to the West. It is already making the Anti-Russia bloc look like a bull in China shop.

The BRICS nations are vehemently improving their ongoing trade partnerships with Russia. The Indian imports of Russian oil surged through the month of June as it continued to ramp up its energy on the cheap. Similar is the case with China. Numerous Chinese companies, including state refining giant Sinopec and state-run Zhenhua Oil, have increased their purchases of Russian crude in recent months after being offered heavy discounts as buyers in Europe and the US shunned Russian energy in line with sanctions over its war on Ukraine.

Additionally, these nations have consistently affirmed their desire to retain their neutrality in the conflict and behave in accordance with their own national interests. Therefore, Brazil’s action is comparable to that of other BRICS allies. But, this formal announcement is enough to give nightmares to the West because its sole motive to tamper with Russian profits is failing badly.

Read More: Brazil’s right-wing ecosystem has collapsed and Bolsonaro is to be blamed for it

Bolsonaro has a dab hand. He has clearly stated he will prefer Brazilian interests over kowtowing to the West. This is just a start. Trust us when we say this, the BRICS could one day solely control the Western economy if all the grudges within the core RIC are solved forever.

Ukraine’s food supplies get hijacked by Italy, Spain, the Netherlands, and Portugal