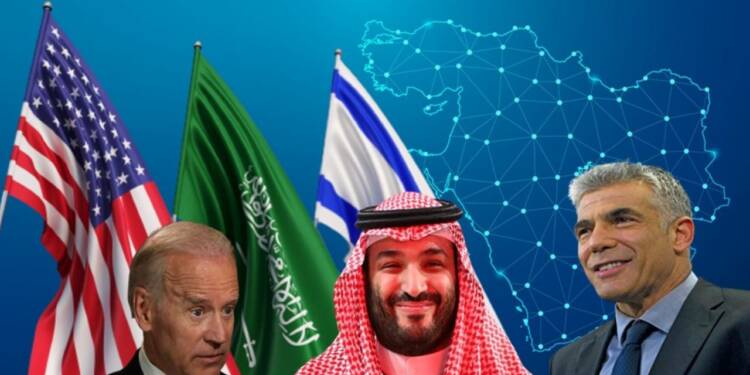 This week, the President of the United States Joe Biden went to Israel and Saudi Arabia in a bid to pull off some new deals and agreements with both nations, ahead of his midterm elections. The visit was quite significant as the president travelled to middle-east after one and a half years of his term.

This visit caught the eyes of every geopolitical enthusiast across the globe because Biden and Saudi Prince MBS were going to meet for the first time, after heavy contention in the aftermath of Jamal Khashoggi’s murder. Similar was the case with Israel where the new PM Yair Lapid met with Biden under the shadow of the Palestine issue.

As the visit concluded, Joe Biden stressed that he has finally found the golden key to open the doors. The meetings were fruitful and important issues were discussed.

Don’t be mistaken, this visit was more of an embarrassment for the USA in general and Democrats in particular. Nothing fruitful, just plain humiliation.

Biden’s visit to West Asia was majorly aimed at asking Gulf leaders to keep pumping more oil, which would drive gas prices down back in the US. Furthermore, Biden wanted to mend ties with Israel by solving the Palestinian conflict.

Even before the visit started, Biden had started making gaffes. Prior to his trip to Israel, Palestinian activists in the US criticized President Joe Biden’s administration for asking Israel to halt operations in the occupied West Bank, saying it highlighted the “magnitude of this administration’s weakness” and its inability to come up with a coherent policy towards Palestinians.

After his arrival, Biden did a horrendous humiliatory act no one could have imagined. ​President Biden made another shocking gaffe about the Holocaust as he arrived in Israel — stressing that it’s important to “bear witness” to the “honor of the Holocaust.”

Then Biden headed towards Saudi Arabia, on which the whole world had its eyes. There, Biden met with some of his greatest humiliations of all time.

For one and a half years, Joe Biden and MBS had really bitter relations with each other. Biden had vowed to make Saudi Arabia a ‘pariah’ state but now, the time has changed. At this moment, Joe Biden understands he needs MBS more than anyone else.

You see, Saudi Arabia could help the US in bringing down its gas prices, but a big thorn in between was the deteriorating relations between both nations, ever since Biden took charge. MBS and Biden never had talks with each other, so this meeting was surely embarrassing for Biden. MBS left no stone unturned to show his discontent towards Biden.

In just 24 hours, Biden’s image of a ‘human rights defender’ was completely tarnished as he backtracked from his own pledge to avoid meeting with MBS. In the meeting, Biden tried raising the issue of Khashoggi, but MBS replied in such a manner that would have surely irked the 79-year-old President.

MBS denied responsibility for the killing of Khashoggi at the kingdom’s Istanbul consulate. Furthermore, MBS reminded the US of its own wrongdoings. MBS reminded Biden of the sexual and physical abuse of prisoners at Iraq’s Abu Ghraib prison by US military personnel and the killing of Palestinian American journalist Shireen Abu Akleh in the occupied West Bank.

Furthermore, Saudi Arabia made it very clear to the USA that the opening of air space for Israel has “nothing to do with diplomatic relations” and it’s not a step toward normalization.

The meeting between the two leaders definitely did not end on any good note. Biden came back to the USA completely empty-handed. According to the Arab News newspaper, the 30-minute discussion ended with Saudi Arabia saying that it did not have any additional capacity to increase oil production beyond 13 million barrels per day.

Joe Biden’s sole motive through this meeting was to secure oil supplies and mend fences with the middle east. But, his gaffe and arrogance blinded him and now, the USA is back to square one.